Rev. Adam Daniel Williams, Minister, civil rights activist, and grandfather of Dr. Martin Luther King, Jr. He also was a president and a founder of the Atlanta Chapter of the NAACP. Rev. A. D. Williams was a proud positive-thinking man of God who spent his entire life fighting against injustice and racisim.

He also was a hardworking, self-made man, who was a loving and dedicated husband and father. Throughout his life Williams tried to protect his family from the cruelties he had experienced because of racism. Later living in Atlanta helped to make this possible to some degree. Rev. A. D. Williams, the son of a slave preacher was born in Greene County, Georgia in 1861 to slaves Willis and Lucretia Williams.

He celebrated his birthday on January 2, 1863, the day after the effective date of the Emancipation Proclamation.

He spent his childhood on the Williams plantation. After the death of his father in 1874, Williams and his family moved from the Williams plantation to nearby Scull Shoals, a rural commuity on the Oconee River. Williams desire to follow his father, a slave preacher into the ministry was evident even as a child, when it was his greatest pleasure to preach the funeral of snakes, cats, dogs, horses or any thing that died.

The children of the community would call him to preach the funeral and they would have a big shout. Although he was unable to attend school because of the demands of sharecropping, the seven-year old Williams reportedly attracted the people for miles around with his ability to count. Taught by several ministers in the community, he earned his license to preach in April 1888. During the late 1880s and early 1890s, Williams tried to make a living as an itinerant preacher while supplementing his income with other work. An injury in a sawmill accident left him with only the nub of a thumb on his right hand.

Seeking better opportuities elsewhere, Williams joined the black exodus from Greene County. In January 1893, he left for Atlanta, where he was called to as second pastor of Atlanta’s Ebenezer Baptist Church. While Ebenezer was a small and struggling congregation when he arrived, the church grew in strength and popularity, as did Williams. 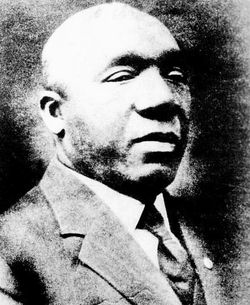 Throughout his many years as pastor Williams transformed the church into a prominent institution with nine hundred members. The construction of the church’s famous old edifice on Auburn Ave. was constructed while Williams was pastor in the 1920s. Recognizing that his long-term success as an urban minister required that he overcome academic shortcomings, he enrolled at Atlanta Baptist College (now Morehouse College), taking both the elementary English and the ministers’ courses of study. In May 1898, Williams received his certificate from the ministerial program.

While in Atlanta, he met his future wife, Jennie Celeste Parks, and they married on October 29, 1899. On September 13, 1903, she gave birth at home to their only surviving child, Alberta Christine Williams, mother of Dr. Martin Luther King, Jr. As a minister Williams was one of the pioneers of a distnctive African-American version of the social gospel, endorsing a strategy that combined elements of Booker T. Washington’s emphasis on black business development and W. E. B. DuBois’s call for civil rights activism.

Early in 1917, Williams became involved in an effort to organize a local branch of the National Association for the Advcement of Colored People (NAACP). He exprerienced early success as an NAACP leader and was described in an account as “a forceful and impressive speaker, a good organizer and leader, a man of vision and briliant imagination, which he sometimes finds it necessary to curb.” During his tenure, the brach grew to 1,400 members within five months, and the newly invigorated NAACP spearheaded a major effort to register black voters.

Williams also helped to get Booker T. Washington High School built, the first black high school in Atlanta. Williams continued to pastor Ebenezer until his sudden death in 1931 from a heart attack while playing with his grandaughter little Christine (Martin Luther King, Jr’s sister). At the time of his death his obituary was effusive: “A. D. was a sign post among his neighbors, and a mighty oak in the Baptist forest of the nation,” it said.

“Born in the country and with limited literary preparation, his wealth of native ability, tact and application made him a man among men and a force to be reckoned with in local, state, and national economic and ecclesiastical councils. He was a preacher of unusual power, an appealing expermimentalist, a persuasive evangelist, and a convincing doctrinarian.” Since Williams death, an elementary school and a park in Atlanta have been named after him. 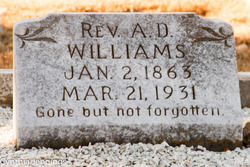 The African Diaspora Is A Manifestation Of God's Power

Lets Prayer Together; one spirit, one mind, in prayer; us, we; not I, me!

Big Ben Out for the Season