When we study racial inequality, we tend to consider factors that affect people while they are awake. Differential access to safe neighborhoods with good schools, decent jobs and unbalanced treatment by police and the courts surely have much to do with the stubborn disparities in wealth and well-being among blacks and whites, in particular. Yet it may be just as important to consider what happens when we’re asleep. Race shapes our sleep, a relationship that has surprising roots deep in our national past.

African Americans suffer from a “sleep gap”: Fewer black people are able to sleep for the recommended six to nine nightly hours than any other ethnic group in the United States; compounding matters, a smaller percentage of African Americans’ slumber is spent in “slow-wave sleep,” the deepest and most restorative phase of sleep that produces the most benefits in healing and cognition. Poor sleep has cascading effects on racial health disparities, including increased risk of diabetes and cardiovascular disease.

The racial sleep gap is largely a matter of unequal access to safe, reliable and comfortable sleep environments, and this sleeping inequality has a long history. For centuries, whites have tacitly accepted — and even actively created — such inequality. Aboard the ships of the transatlantic slave trade, African captives were made to sleep en masse in the hold, often while chained together. Once in the New World, enslaved people were usually still made to sleep in tight quarters, sometimes on the bare floor, and they struggled to snatch any sleep at all while chained together in the coffle. Slaveholders systematically disallowed privacy as they attempted round-the-clock surveillance, and enslaved women were especially susceptible at night to sexual assault from white men.

One might think that slaveholders, looking out for their bottom line, would be interested in ensuring at least a modicum of restful slumber for their enslaved workers. The social reformer Thomas Tryon made this argument in 1684 when he wrote of “inconsiderate masters” who compel the enslaved to work so hard that they were often so “overcome with weariness and want of proper Rest” that they would “fall into the fierce boyling Syrups” of the sugar pots. Ensuring proper rest, he wrote, “would add much to their Profit” as well as to the slaves’ health. 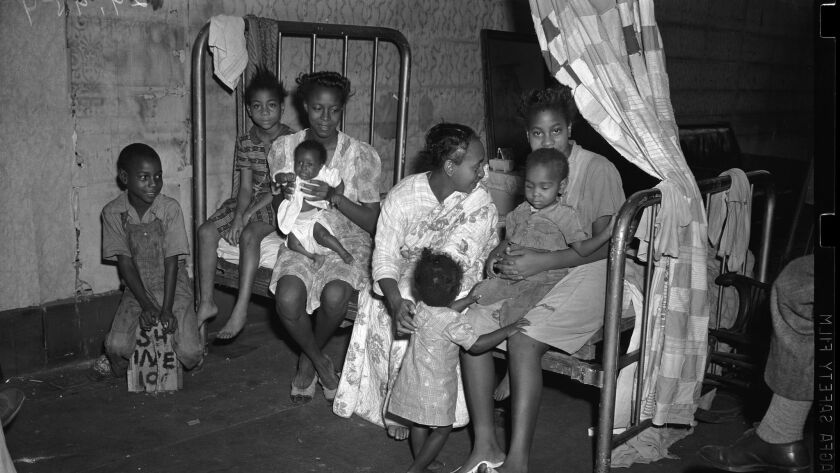 Yet just as often, slaveholders justified overwork and minimal rest as a positive good, in the process elaborating curious theories about the supposed natural differences between the races.

Thomas Jefferson, for instance, opined that black people simply “require less sleep” than whites. And while he noted enslaved people’s propensity to drop off quickly at the end of a long day, he convinced himself that a rapid descent into sleep was evidence of inferior intellects (rather than insufficient rest). White people, he observed, could keep themselves up late into the night to pursue intellectual or creative endeavors, whereas “negroes” were deficient in the powers of “reflection” that allowed them to do so: “An animal whose body is at rest, and who does not reflect, must be disposed to sleep of course.”

Louisiana physician Samuel Cartwright, who conducted a widely disseminated study of the medical condition of slaves, also believed that differences in sleeping were evidence of the natural supremacy of the white race. He claimed that black people at rest instinctively smothered their own faces with blankets or clothing, impeding the flow of oxygen to the brain, and that this obstruction permanently stunted their intellectual development. As for slaves who wandered exhausted across the plantation, he considered this a special kind of black-people disease known as “dysaesthesia aethiopica.” The cure, Cartwright counseled, was “hard work in the open air” and increased discipline on the part of the slaveholders.

The killing labors, constant anxiety and wretched sleeping conditions of slavery no doubt produced chronic fatigue, and yet Jefferson and Cartwright perversely identified exhaustion as the problem and hard work as the cure. Such cures were often administered at the end of a whip. As Frederick Douglass put it in his memoir, “More slaves were whipped for oversleeping than for any other fault.”

Douglass went as far as to suggest that keeping the enslaved population in a state of constant fatigue was a useful tool in breaking their will. He wrote that, on Sundays, he regularly found himself “in a beast-like state, between sleep and wake” that made it impossible for him to act on the “flash of energetic freedom [that] would dart through my soul.” Sinking back to the ground, he would simply mourn over his “wretched condition.”

What remains of this history is a profound confusion as to the causes and effects of our racial inequalities. Out of Jefferson and Cartwright’s pseudo-scientific racism, the stereotype of the “lazy black man” was given medical legitimacy: Exhaustion was seen as a character trait requiring more hard work, rather than an effect of a fractured sleeping environment and extreme physical and emotional duress.

To this day, opportunities for sound sleep are distributed unequally among the races, while the effects of such disparities are frequently misidentified. For example, minority students who perform poorly on tests, appear apathetic or act out in school are often blamed for lack of will or poor values, when in fact they may be irritable, depressed, or unfocused in large part because they’re tired and stressed. An ongoing study by psychologist Tiffany Yip of Fordham University examines the joint effects of ethnic discrimination and sleep deprivation on African American and Latino youth; her preliminary findings suggest a vicious cycle in which experiences of discrimination lead to poor sleep, which in turn leads to higher levels of anxiety, lower engagement in school and deepening problems of self-esteem.

Some pediatricians, psychologists and public health advocates are beginning to understand that detection, prevention and treatment of poor sleep is an important aspect of improving the educational performance of socioeconomically disadvantaged children. Little public attention, however, is given to the more pervasive problem of unequal sleeping conditions that is borne of our troublesome racial history.

Slave quarters are now tourist attractions, but the descendants of enslaved Africans are still more likely than whites to live in inhospitable sleeping environments. As public health scholar Lauren Hale points out, African Americans tend to live in noisier and more dangerous urban environments than whites; such environments may lead to shorter and shallower sleep. African Americans are also more likely to have undesirable or unpredictable work schedules than whites, which leads to chaotic sleep schedules. Increased risk of hunger as well as fear of violence or of harassment by police make a good night’s sleep even harder to obtain.

Langston Hughes described American slavery as “the rock on which/Freedom stumped its toe.” As we attempt to address the inequities of wealth, education, health and incarceration that persist across the color line, we would do well to remember that these problems were formed by night as well as by day. If we want to close that gap, we’ll have to confront Hughes’ stubborn rock, which for too many serves in place of a pillow.

The Untold Story And Meaning Behind The RBG Flag

From The Pulpit To The People