Antigua and Barbuda has written to the Harvard Law School to make amends for Antiguan slave labor contributions to the creation of the school in the form of payment of reparations.

“Reparation from Harvard would compensate for its development on the backs of our people,” Browne wrote in an October 30 letter to Bacow, reports .

“Reparation is not aid; it is not a gift; it is compensation to correct the injustices of the past and restore equity. Harvard should be in the forefront of this effort,” Browne added.

Bacow in a response said the Harvard Corporation in 2016 approved the removal of the law school’s shield, which included symbols drawn from the family crest of Isaac Royall Jr., the Antigua slaveholder who left land to Harvard College in his will to establish its first professorship in 1815 leading to the creation of Harvard Law School, according to Miami Herald.

A stone memorial acknowledging the “the enslaved whose labor created wealth that made possible the founding of Harvard Law School” was then mounted in the plaza.

“These were significant steps for our entire community,” Bacow wrote, adding that the university recognizes “that there is more work to be done.”

“Harvard is determined to take additional steps to explore this institution’s historical relationship with slavery and the challenging moral questions that arise when confronting past injustices and their legacies,” Bacow wrote.

Browne is, however, unsatisfied with Bacow’s response to his request. He said the failure of to acknowledge its obligations to the eastern Caribbean nation at a time when other universities are acknowledging their ties to slavery and making reparations is “shocking if not immoral.”

Weeks earlier, Princeton Theological Seminary earmarked $27.6 million for a reparation plan to “repent” for its past ties to slavery.

The money will be used to fund scholarships and provide cross-cultural changes to its curriculum, the New Jersey seminary said in an official statement.

The reparations initiative will include 30 new scholarships and five doctoral fellowships for students who are descendants of slaves or from underrepresented groups,

“The Seminary’s ties to slavery are a part of our story,” Princeton Seminary President M. Craig Barnes said.

“It is important to acknowledge that our founders were entangled with slavery and could not envision a fully integrated society.

“We did not want to shy away from the uncomfortable part of our history and the difficult conversations that revealing the truth would produce,” Barnes added.

Although , founded in 1812, did not own slaves, the historical audit uncovered it benefited from the slave economy, both through investments in Southern banks in the mid-19th century and from donors who profited from slavery. 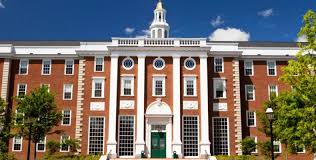