It’s been four months since anti-racism protests filled Europe’s boulevards and parks, toppling statues of enslavers and colonizers like Edward Colston and Belgium’s King Leopold II, and prompting larger conversations around anti-Blackness on the continent.

But even as the swells of crowds with raised fists have left the streets, the cause of the protests remains. Black lives still hang in the balance, and now activists are moving from marches to ideological battles in classrooms, boardrooms, and online spaces.

In Ireland, that means shifting focus onto the need to dismantle Direct Provision. France has been grappling with not only police brutality towards Black and Muslim people but attitudes toward minorities from France’s former colonies in Africa and ideas on colonialism in general, including questions of returning stolen artifacts to former colonies.

And in Sweden— which has traditionally seen itself as a post-racial paradise—the first step is getting the country to admit to its own racist structures, past and present.

Since protests spread across Sweden in early June, ugly truths about its racialized history have been seeping into public spaces. Despite the country being considered one of the least racist in the world, police biases and Afrophobia are rife, and Sweden’s past involvement with the cross-Atlantic slave trade and racist pseudo-science is ignored or erased.

Protests in Stockholm, Gothenburg, and Malmö this summer were met with police backlash for breaking the COVID-19 limit of 50 people to a public gathering. More than 2,000 people took part in the Gothenburg protest, raising their voices against the deep-rooted racism that underpins much of Swedish society. Nontokozo Tshabalala and Aron Zahran, activists and mobilizers from the BLM protest in Gothenburg, say the first step is to get Swedish society to acknowledge that there is a racism problem in the country, which they say the white population loves to ignore.

“They pretend that the issue isn’t there. Sweden only ended slavery after pressure from the U.K. and international players, and even then King Gustav III said that no Swede has ever had any part in the slave trade, which is a blatant lie and feeds Swedish denialism,” says Zahran.

Sweden, long considered a socialist utopia and a bastion of human rights by the global left, is not post-racial—nor does it have a compassionate police force. Historically, the country participated in the processes that have come to define racist systems all over the world: Sweden’s Caribbean colony of Saint Barthélemy (now the French overseas territory of St. Barth) was active with slave trade in the 18th and 19th centuries. Scandinavian involvement in the slave trade is often overlooked but Sweden was one of the last countries in Europe to abolish slavery, a full 14 years after the U.K. The country’s colonization of the Caribbean island is still taught in its schools as a practice in benevolent leadership.

The country was also a cradle for the pseudoscience of race biology, with Swedish biologist Carl Linnaeus being the first scientist to divide people into biologically-defined races—definitions that were meant to justify the discrimination of people of color around the world for centuries. Scientific racism played a large role in the definitions cited by South Africa’s former government to set up the system of apartheid, which has since been deemed a crime against humanity.

Linnaeus, known in Sweden as the father of taxonomy, is celebrated all over the country but there have been calls to remove his statues, calling him the father of racial division. However, many Swedes see this as an affront to the country’s heritage and protected the statue in Stockholm from possible vandalism earlier this year.

The Swedish State Institute for Racial Biology in Uppsala continued to take a leading role in research dealing with racial eugenics well into the 1930s and facilitated the implementation of forced sterilization laws, which pertained to certain groups of people with “unwanted” genes, such as people of mixed race, the Swedish Romani population, and the indigenous Sámi people.

The aim was to prevent “ethnically inferior inhabitants” from having children. This research paved the way for the Nazi party’s 1933 Law for the Prevention of Progeny with Hereditary Diseases, eradicating those seen as lacking “racial hygiene.” These laws were only completely abolished in the 1970s, despite the practice of sterilization being universally declared criminal and barbaric after the 1946 Nuremberg Trials.

Even so, modern-day Sweden likes to brush over these issues of the past, in a poignant example of the problem of nationalism in Europe today: racism is not deemed a mainstream problem. It is instead seen as an expression of extremism, where there are only good people or Nazis.

The right-wing Swedish Democrat party, which was founded by a Nazi sympathizer and which now holds 13 percent of the country’s parliament, is treated as a national anomaly rather than a growing threat. Scandanavia’s neo-Nazi party, the Nordic Resistance Movement (Nordfront), is still painted as a national joke, even after 2019 attacks on Jewish cemeteries across Scandinavia on the 81st anniversary of ​Kristallnacht.

Activists Zahran and Tshabalala say the largest hurdle for BLM in Sweden right now is educating white Swedes on their own history. This is the country where former prime minister Olof Palme said in 1965: “Democracy is firmly rooted in this country. We respect the fundamental freedoms and rights.

Murky racial theories have never found a foothold here. We like to see ourselves as open-minded and tolerant.” It’s a popular sentiment, one that pretends racist ideology was never coddled in the heart of Swedish society in the arms of Linneaus and his ilk.

Despite Sweden’s self-professed tolerance, there still seems to be a pattern of discrimination and exclusion in Swedish society, as well as Europe more broadly: the “us” vs. the foreign “them.” While national minorities such as the Sámi, Roma, and Jewish people have a long history of being excluded from the Swedish nation, people of color are most evidently discriminated against in every major arena of society, such as the housing and job markets.

“If your name is not Swedish, you are less likely to get an interview,” says Zahran. “Black Swedes are paid less, need a higher level of education to enter certain positions, and are less likely to be accepted into Swedish society.” Tshabalala adds that while all of this is true, Swedes maintain a self-righteous attitude that the country doesn’t see color.

Nevertheless, urban areas are spatially segregated along racial lines, with people of color concentrated to low-income housing projects. Many of these areas are considered “problem areas” by the police, and the media (and public) quickly latched onto the term “no-go zone,” implying that those areas are lawless, with little attempt made to cover up the reason why they’re known as such.

Although few modern Swedes are descendants of enslaved people, over one-quarter of all Swedish citizens have heritage from outside Scandinavia, including approximately 350,000 Afro-Swedes, most of whom arrived in the past 50 years. “If you are a first-generation Swede, with your parents having been born elsewhere, it’s the same as having Finnish or Norwegian parents—but they are seen as citizens, whereas Black Swedes are always, no matter whether we are born here, seen as foreign,” says Zahran. For Black Swedes, structural racism is apparent from racially-

motivated hate crimes, police and security profiling, to discrimination in everyday society. “Oftentimes,” Zahran says, “security forces quietly belong to growing neo-Nazi groups.” The fact that the Danish neo-Nazi politician Rasmus Paludan’s followers felt comfortable enough to enter the country to burn copies of the Qu’ran near one of the city’s mosques in August shows the complacency toward racism in Sweden. “This is what we are dealing with,” says Tshabalala.

Both Tshabalala and Zahran point out that racism extends to the Swedish criminal justice system. “Whiteness is so embedded in Swedish culture and even the human rights realm, that it’s seen as okay when a Black woman’s rape case is thrown out of court because there was lack of evidence,” says Tshabalala, citing the attitudes towards immigration and sexual violence, a correlation often used by the right-wing Swedish Democrats in the argument against immigration and giving asylum to refugees.

There have also been many cases of violence with racist overtones, such as Stockholm security guards abusing a 12-year-old boy of Somali descent in the Kista Galleria shopping center and a pregnant Afro-Swedish woman at Hötorget’s underground station.

The left in the U.S., such as Alexandria Ocasio-Cortez, often speak of the “Nordic model” as an example of democratic socialism, but the reality is that the model is slowly moving closer to that of America, especially in its income inequality, which has increased faster than any other country in the world.

Increasingly neo-liberal policies have affected working-class Swedes and they have disproportionately impacted racial minorities in larger cities like Stockholm and Malmö, where it is now common to see primarily Black neighborhoods emerging that are low-income and underdeveloped, much like in the U.S.

Swedish police may not carry guns, but that doesn’t stop police brutality, and Tshabalala says the target demographic in racial profiling is Black Swedes. In a recent report by criminologist Leandro Schclarek Mulinari, minorities tell of how they are harassed by police and security guards with violent and intimidating methods, all based on their appearance.

Mulinari also details over-policing in Black areas, with police disproportionately targeting Black and minority Swedes through “selective policing,” despite higher self-reported drug usage in majority-white neighborhoods. “Yet Swedish people brush these facts aside like it’s not a problem,” says Zahran. “The first goal is to educate and get people to admit this thing exists.” 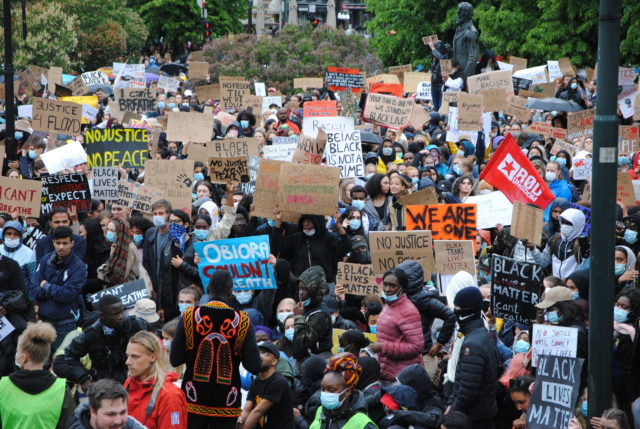 The BLM movement in Sweden is not just asking to reform the police, but also for a redistribution of resources, to invest in communities overlooked by white politicians and a society run by and for white people. Eradicating ignorance is the only way to get there. “Advertising and creative industries need to change perceptions about Black people.

We need Black faces, Black voices, and Black representation,” says Tshabalala. “And we need to keep BLM on the agenda. We can’t wait for the next person to become a statistic. We don’t want someone to die to have to move the fight forward.”

Zahran says the fact that Sweden has an equality minister who is getting involved with the movement is a positive step forward, but there’s still such a long way to go. While corporations are falling over themselves to be “BLM friendly,” the movement is still busy with the groundwork in education and awareness.

“We need to target industry and the consumer culture because Sweden is so consumer-driven. Whiteness in these spaces keeps the status quo,” says Tshabalala. “We also need to get more representation in NGO and human rights spaces, because we can’t have white people heading up foundations aimed at Black empowerment.”

Still, BLM has not lost momentum in Sweden, according to the activists. They both agree that the key is to keep that energy going and not get distracted from the goal even though the protests are over. Where BLM Sweden is at right now is trying to change public perceptions of Black people and empower others to do the same. “BLM gave Black people and allies the impetus to effect change,” says Zahran, “and that’s where we are: pushing forward, taking each issue step by step.”