Diahann Carroll, who more than half a century ago transcended racial barriers as the star of “Julia,” the first American television series to chronicle the life of a black professional woman, died on Friday at her home in West Hollywood, Calif. She was 84.

Her publicist, Jeffrey Lane, said the cause was complications of breast cancer. Ms. Carroll had survived the cancer in the 1990s and become a public advocate for screening and treatment.

A situation comedy broadcast on NBC from 1968 to 1971, “Julia” starred Ms. Carroll as Julia Baker, a widowed nurse with a young son. The show featured Marc Copage as Julia’s son, and Lloyd Nolan as the curmudgeonly but broad-minded doctor for whom she worked. (“Have you always been a Negro or are you just trying to be fashionable?” he asks Julia in an audacious, widely quoted line from the first episode.)

Popular with both black and white viewers, “Julia” in its first season reached No. 7 in the Nielsen ratings, the highest position it attained in its three seasons on the air. Reviewing the show in The New York Times, Jack Gould noted its penchant — then par for Hollywood’s course — for “tiptoeing around anything too controversial.”

However, he added: “At all events the breaking of the color line in TV stardom on a regular weekly basis should be salutary.”

Widely known for her elegant beauty and sartorial glamour, Ms. Carroll began her professional life as a singer and continued to ply that art. She sang on television, in nightclubs, on recordings and on Broadway, where she won a Tony Award.

In films, she starred opposite the likes of Sidney Poitier, Paul Newman, James Earl Jones and Michael Caine. On television, she played the scheming, moneyed Dominique Deveraux on ABC’s prime-time soap opera “Dynasty” in the 1980s.

But it was for “Julia” that she remained most enduringly known. Created by the writer, director and producer Hal Kanter, the show was a novelty for its day: Black women, when they were seen at all in series television, had long been relegated to marginal roles. The few larger parts that came their way were invariably those of domestics.

“Julia” divided critical consensus. It was praised in some quarters as groundbreaking and criticized in others as reductive, Pollyannaish and accommodationist — condemned, in short, for glossing over the stark realities of life that black Americans faced daily.

Though Ms. Carroll publicly defended “Julia,” she acknowledged that in portraying the black experience it made many concessions to the middle-class white viewers it hoped to attract. She also said afterward that her experience playing the character had been both a professional boon and a professional hindrance.

The series made her one of the most visible performers of her day, booked regularly on TV talk and variety show. But in addition, it entailed her becoming a de facto spokeswoman not only for “Julia” but also seemingly for her race, an onus for which she had never bargained.

Carol Diann Johnson was born in the Bronx on July 17, 1935, to John and Mabel (Faulk) Johnson and grew up in Harlem. Her mother was a nurse, her father a New York City subway conductor.

(Though Ms. Carroll sometimes stated publicly that her middle name was originally spelled “Diahann,” she confirmed through her publicist in 2017 that she had adopted that spelling as a teenager, when she began entering TV talent competitions.)

A gifted singer as a child, she was performing with the children’s choir of the Abyssinian Baptist Church in Harlem by the time she was 6. She was soon taking lessons in voice and piano, though she objected that they took precious time from roller skating.

As a student at the High School of Music and Art in Manhattan, she began modeling for Ebony magazine. She also began entering television contests, including “Arthur Godfrey’s Talent Scouts,” under the name Diahann Carroll.

In the early 1950s, while still in her teens, she won “Chance of a Lifetime,” a television talent competition, three weeks running. Her prize was a thousand dollars a week, plus an engagement at the Latin Quarter, the Manhattan nightclub.

Because her parents insisted on a college education, she enrolled in New York University. But she left before graduating to pursue a show-business career, promising her family that if the career did not materialize after two years, she would return to college. She never did.

In 1954, at 19, Ms. Carroll was cast in a small part in “Carmen Jones,” Otto Preminger’s all-black screen adaptation of Bizet’s opera “Carmen.” The film starred Harry Belafonte and, in the title role, Dorothy Dandridge.

That year she also made her Broadway debut, in the role of Ottilie, alias Violet, in “House of Flowers,” the Truman Capote-Harold Arlen musical set in a West Indies bordello. Captivated by her performance, the Broadway composer Richard Rodgers was determined to use Ms. Carroll in one of his own shows.

He tried to cast her in “Flower Drum Song,” his 1958 musical with Oscar Hammerstein II. But whatever makeup she was put into, she could not be got to look like any of the Chinese-Americans on whom the show centered, and it opened without her.

Ms. Carroll played Clara, the fisherman’s wife, in Preminger’s 1959 screen adaptation of “Porgy and Bess,” the opera by George and Ira Gershwin and DuBose Heyward. But because the film’s music supervisor, André Previn, deemed her voice too low, her singing — including the emblematic number “Summertime” — was dubbed by the soprano Loulie Jean Norman.

She met with particular acclaim in early 1962, when she at last starred in a musical by Rodgers, “No Strings,” written expressly for her. He composed both music and lyrics: It was his first show after the death in 1960 of Hammerstein.

In it, Ms. Carroll portrayed an American fashion model living in Paris who embarks on a romance with an American novelist, played by Richard Kiley. That the romance was interracial was largely incidental to the plot.

The performance won her the Tony Award for best actress in a musical.

The next few years brought a few guest roles on television shows. But jobs remained far between.

“I’m living proof of the horror of discrimination,” Ms. Carroll said in late 1962, testifying at a congressional hearing on racial bias in the entertainment industry. “In eight years I’ve had just two Broadway plays and two dramatic television shows.”

She added: “I’ve asked repeatedly why. Surely I’m not so difficult to include.”

Then along came “Julia.” 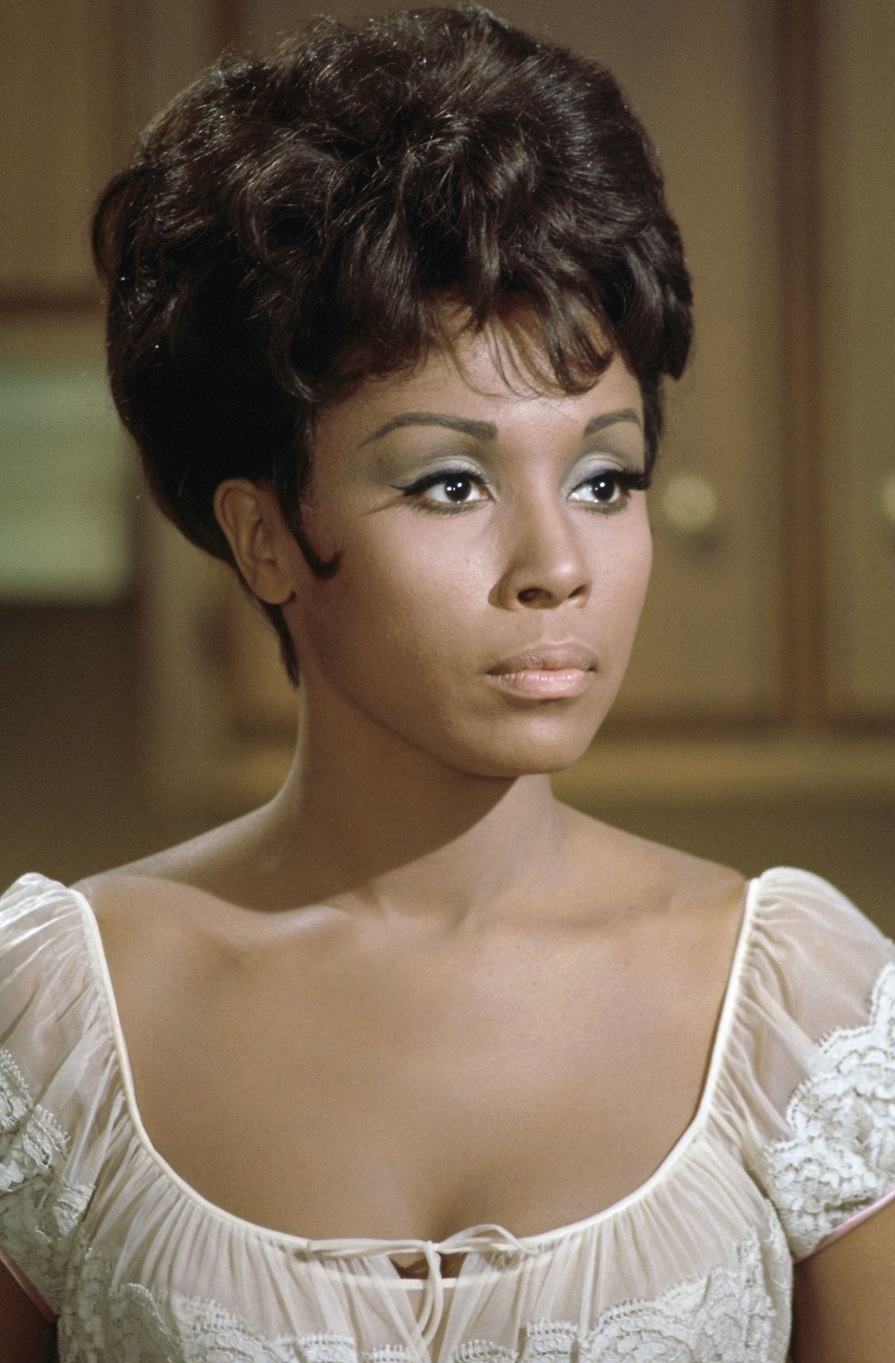 Ms. Carroll’s portrayal of Julia Baker was generally praised for its poise and warmth. For the role, she received an Emmy nomination and won a Golden Globe Award.

But the show as a whole was criticized on several fronts. One was the fact that Julia’s elegant apartment, magnificent wardrobe and saintly, unruffled temperament were surely unrepresentative of the life of any single working mother of a young child.

More serious charges concerned issues of race. Though the show’s scripts dealt with various slights of racism — or “discrimination,” as it was called then — in a gentle, homiletic manner, many critics felt that “Julia” painted a far rosier picture of American racial amity than actually existed in 1968.

In an interview with TV Guide that December in which she addressed the portrayal of black characters on television, Ms. Carroll acknowledged: “At the moment, we’re presenting the white Negro. And he has very little Negro-ness.”

In a first-person article in Ladies’ Home Journal in 1970, Myrlie Evers, the widow of the slain civil-rights leader Medgar Evers, summed up the contradictions inherent in “Julia.”

“Of course, Julia bears little resemblance to me or any other flesh-and-blood woman,” Ms. Evers wrote. “She is a television fantasy like so many others. The significant difference is that Julia Baker is black.”

She continued: “Perhaps the most significant thing about ‘Julia’ is that it is carried by many stations in the South. My relatives in Vicksburg, Miss., watch it every week. Not so long ago, as I can testify, the appearance of a black face on a network program was a signal in Mississippi for the set to go dark. Then a sign would appear: ‘Circumstances beyond our control. …’”

Ms. Carroll went on to play a woman very different from Julia in the 1974 film “Claudine,” a drama also starring Mr. Jones. For her portrayal of the title character, a single mother of six in Harlem, she received an Academy Award nomination.

Her television credits include the mini-series “Roots: The Next Generations” (1979) and the TV movies “I Know Why the Caged Bird Sings” (1979), an adaptation of Maya Angelou’s memoir in which she portrayed Ms. Angelou’s mother, and “Having Our Say: The Delany Sisters’ First 100 Years” (1999), in which she played the indomitable Harlem centenarian Sadie Delany opposite Ruby Dee.

Onstage in the 1990s, she was Norma Desmond in the Canadian company of the Andrew Lloyd Webber musical “Sunset Boulevard,” the first African-American to play the role.

Ms. Carroll’s first marriage, to Monte Kay, a casting director and music impresario, ended in divorce, as did her second, to Fred Glusman, a Las Vegas boutique owner. Her third husband, Robert DeLeon, the managing editor of Jet magazine, died in a car crash in 1977, two years after they were wed. Her fourth marriage, to the singer Vic Damone, ended in divorce. (Mr. Damone died last year.) She also had highly public engagements to Mr. Poitier and the English television journalist David Frost.

She is survived by a daughter from her first marriage, Suzanne Kay; a sister, Lydia; and two grandchildren.

In one respect, Ms. Carroll said, she was a victim of her best-known show’s success: After she became widely associated with the motherly Julia Baker, her nightclub bookings as a glamorous chanteuse in slit-up-to-there evening gowns dried up for some years.

In mirror image, Ms. Carroll’s glamour had nearly cost her the role of Julia in the first place. Keenly aware of her glimmering image, Mr. Kanter, the show’s creator, was reluctant to consider her for the demure Julia Baker.

Knowing of his reservations, Ms. Carroll arrived for their first meeting, at the Beverly Hills Hotel, wearing a very plain dress. Granted, it was a Givenchy, but it had simple, modest lines.

When she entered the hotel, Mr. Kanter did not recognize her. But he pointed to her anyway.

“That’s the look I want for this character,” she later learned he had said to a colleague. “A well-dressed housewife just like that woman.”

‘Was It a Threat?’: Residents of Elaine, Arkansas, Calling Cutting Down of Tree Planted to Remember Hundreds of Black Sharecroppers Killed In 1919 Race Riot a ‘Hate Crime’