The relationship between the peoples of ancient Nubia and Egypt is one of history’s show of alternative power relations.

During the New Kingdom period (ca. 1550-1050 BC), Egypt succeeded in occupying most of Nubia. At the site of Tombos, located in northern Sudan, Egyptianization of Nubians is so fused to determine if Egyptian colonists or Nubian leaders ruled.

In the interesting exchange of power of the two states, however, Alexander Balogun, an Obafemi Awolowo University product makes the case that Nubians from the south in today’s Sudan first forged many of ancient Egypt’s cultural and spiritual system they have come to be noted for.

He notes via the Quora platform that discoveries of the Archeological Research performed by from the University of Chicago’s Oriental Institute, during the excavation of the Upper Nile of Aswan for the construction of the Aswan dam and inundation of the Upper Nile, led them to a thesis. The thesis discovered that the earliest Pharaohnic Monarchy in the Nile Valley was from the region of Lower Nubia, Qustul (Modern day Aswan) as the excavation proved that the White Crown (later used by Upper Egypt) originated from Qustul about 1,000 years before it was used in Egypt.

Stephen Tempest, describing himself as qualified amateur historian commenting on Nubia’s influence on ancient Egypt clarified that while Greeks wrote ‘Aethiopians’, the people they were referring to were not citizens of Ethiopia but rather Nubians. Greeks and Romans used ‘Aethiopians’ for nearly any dark skinned African. 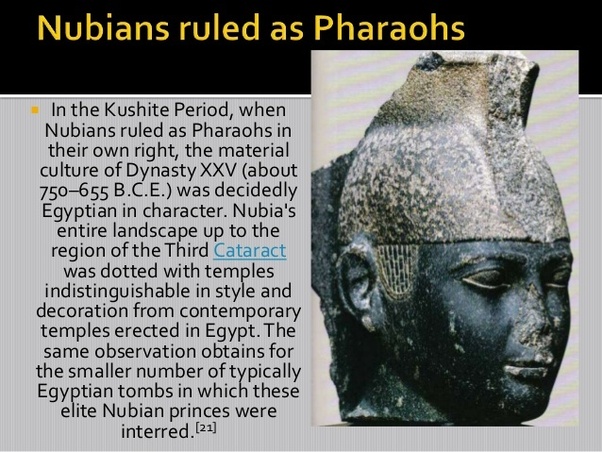 A reproduction of the

“Nubia had once been a colony of Egypt, but when the Bronze Age Collapse happened, Egypt fell apart into competing kingdoms. Rather ironically, the newly-independent kings of Nubia proceeded to establish control over southern Egypt, and then Taharqua’s father Piye conquered all of Egypt and made himself Pharaoh. This established the 25th Dynasty, also called the ‘Nubian Dynasty’. It ruled Egypt for 88 years before being overthrown and replaced by an indigenous Egyptian dynasty,” he rendered.

The 25th dynasty of Egypt was forged by Nubians from Kush. The Nubian conquest came during a low point in Egypt. The country was split into warring factions, and largely ruled by Libyans rather than Egyptians.

The Kushite kingdom was a major force in Egypt’s confused affairs in the middle of the 8th century BC. Kushite king Kashta was powerful enough that he could arrange for his daughter Amenirdis to be adopted into the ruling house of Thebes. She became “God’s wife of Amun,” and part of the family of the last Egyptian who had ruled the entire country. This connection provided legitimacy for later Nubian claims on Egypt.

“. He assumed direct control of Thebes and the rest of Upper Egypt, though it’s not clear if this was achieved by violence or through the influence his kingdom already had through its alliance. In either case, the other factions in Egypt did not like the sudden appearance of a new power and they banded together against Piye. He defeated them soundly and firmly established his kingdom as the most powerful of the many Egyptian factions.”

“It’s important to point out that the Kushites already had longstanding cultural and religious ties with Egypt: they didn’t appear suddenly as unfamiliar barbarians. They were very familiar with Egyptian art, architecture and religion; their rule was always portrayed as being part of, rather than a break from, Egyptian tradition. The Kushite dynasty consolidated its control over Egypt in the reign of Shabaka (705–690 BC). Shabaka left a statue of himself at Karnak wearing the traditional Two Crowns, a symbol that he had united Egypt for the first time in over a century.

“Taharqa succeeded Shabaka in 690, but the surviving records leave a lot of questions. Some modern scholars believe that Taharqa dethroned Shabaka, rather than succeeding him peacefully. Years of proxy-wars in Canaan and the Levant turned into a direct conflict during the 670s; in 671 the Assyrian emperor Esarhaddon defeated Taharqa and captured Memphis,” Antiquarian Steve Theodore submitted.

He further added: “Tarharqa retreated to Upper Egypt to continue the fight, but the Assyrians had the upper hand. The last Kushite pharaoh was Tantamani, who was driven out by the Egyptian Psamtik I. The last vestiges of Nubian control in Egypt were over by 656.”

The can be traced back in recognisable form to around 3000 BC. It was to endure for over three millennia and it is perhaps the most instantly recognisable of all ancient cultures today.

From ‘Anonymous,’ key excerpts from inside Trump White House on Putin, Hillary