How The Daughters Of The Confederacy; Propaganda, and Power Influence Racism In Society

I’ve heard people say it in person, and I’ve seen people say it online: The Civil War wasn’t even fought over slavery. Stop believing what “they” tell you.

Before I’d taken the time to dig into this topic so I could form a solid rebuttal, I’d ask, “But if it wasn’t fought over slavery, what was it fought over?” The answer is usually “states’ rights” or “money” or “northern overreach.”

The Secession Papers, written at the time of Southern states’ withdrawal from the Union, explicitly state that their “right” to continue owning slaves was the primary reason for seceding. How could anyone argue against this fact given that we have such plainly understood and easily accessible source material.

And yet the argument persists, and not in small numbers. In a Pew study done in 2011, 48% of people surveyed believed the Civil War was fought over “states’ rights” compared to only 38% who said it was fought “mainly over slavery.”

Where did the idea that the Civil War “wasn’t about slavery” come from?

Perhaps the greatest contribution to the lie that the Civil War was not about slavery comes from a group called the United Daughters of the Confederacy. This group influenced generations of Americans, especially in the south, to develop a softer, more forgiving view of those who fought on the side of the Confederacy — of those who fought to keep other human beings enslaved for their own financial gain.

Who are the United Daughters of the Confederacy?

Organized in 1894, the UDC claims it is “the oldest patriotic lineage organization in the country.” Their website states their goals as, among other things:

The UDC is best known for its role in the erection of and ongoing defense of Confederate monuments. Their website claims the group has “benevolent” intentions and means only to preserve history, but looking at the goals above, it is clear their agenda is meant to reach beyond objective truth. Valor? Can there be valor in fighting for the right to own other human beings? Only if you’re dishonest about what was being fought for. 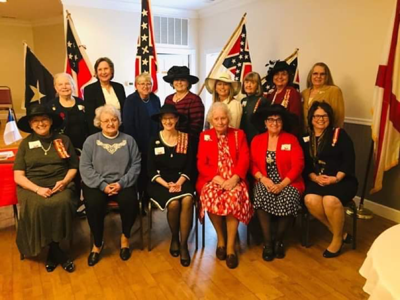 How the United Daughters of the Confederacy Rewrote History

The UDC is most famous for erecting hundreds of Confederate statues across the southern United States and then fighting to preserve their placement when people pointed out how offensive and racist those statues were and asked for them to be taken down. But the UDC’s other actions had an even broader impact than the mere placement of statues memorializing white supremacist generals. The group had a massive influence on the selection of school textbooks and history curriculums throughout the south.

The UDC placed thousands of Confederate portraits and Confederate flags in public schools in the early 1900s. They hosted essay contests with themes such as “The Origin of the Ku Klux Klan” and “The Right of Secession.” The Rutherford Committee of 1919, named for prominent UDC member and avowed white supremacist Mildred Rutherford, gathered members of the UDC and other Confederate heritage associations and produced a 23-page pamphlet called, “A Measuring Rod to Test Text Books, and Reference Books in Schools, Colleges and Libraries.”

This pamphlet demands, on page 5, “Reject a book that says the South fought to hold her slaves.” It elaborates in the coming pages, with subheadings like, “The North Was Responsible for the War Between the States,” “The War Between the States Was Not Fought to Hold the Slaves,” and “Slaves Were Not Ill-Treated in the South. The North Was Largely Responsible for Their Presence in the South.”

Distributing this pamphlet widely, for decades the UDC lobbied relentlessly — and successfully — across the southern United States, filling schools with textbooks that avoided or outright altered the truth of why the Civil War was fought. In addition to the pamphlet, Rutherford also published a book called Truths of History that expanded on the pamphlet’s assertion that the South had been wronged by the North, that the North was the true aggressor, that the war was not fought over slavery. In this book, she included a blacklist of textbooks that were not to be included in Southern states’ school curriculums. Her influence cannot be understated. States, school districts, and local communities greatly respected the UDC and its affluent, powerful members. They easily bent to the will of the UDC.

A textbook used in North Carolina, called “Young People’s History of North Carolina,” taught curriculum from 1911 and into the 1940s is vague about the Southern states’ reasons for secession and contains passages like this:

As a rule the slaves were comfortably clothed, given an abundance of wholesome food, and kindly treated. Occasionally some hard-hearted master or bad-tempered mistress made the lot of their slaves a hard one, but such cases were not common. Cruel masters and cruel mistresses were scorned then just as men and women who treat animals cruelly are now scorned. These slaves were brought into the colonies fresh from a savage life in Africa and in two or three generations were changed into respectable men and women. This fact shows, better than any words can, how prudently and how wisely they were managed.

Why This Matters Today

A not-insignificant segment of the U.S. population believes the bloodiest conflict fought on American soil was fought over a vague, nebulous idea about “States’ rights,” that the North was an aggressor and the South a hapless yet heroic victim, that slavery was peaceful and enjoyable for the enslaved, and that the Ku Klux Klan was a reasonable if not esteemable organization. Generations of American children attending public school in the South, estimated to be close to 70 million in number, were taught these twisted narratives between 1889 and 1969, the height of the Jim Crow era. Based on the 2011 Pew study and conversations held anywhere in the southern United States, the myths persist.

These false narratives cemented in generations of minds the idea that they were the ones who understood the truth. When people spout these falsehoods, they do it with raging hubris. The lies pour out with haughty certainty, an attitude of intellectual superiority, and a total unwillingness to discuss the contradictions inherent in their claims. You can ask, States’ rights to do what? until you’re blue in the face, but they won’t give you an answer.

This attitude — this certainty of rightness — bleeds into every aspect of our social and political lives. If you are a southerner who believes northerners are ill-informed, condescending aggressors who don’t understand you or your ancestors or basic history, if you believe slavery wasn’t even that bad, that maybe it was even beneficial, how do you react when someone tries to have a conversation with you about systemic racism? How do you respond when another unarmed Black person is killed by police? How do you vote? If you hold a position of power, whether in government or the private sector, how do your beliefs influence your hiring decisions?

Beliefs matter. Truth matters. The United Daughters of the Confederacy still exist today, and though their message has softened and their influence has waned somewhat over the years, they continue to propagate falsehoods. They remain in many circles a respected organization. Their work has influenced millions of Americans to believe a narrative that is easily verifiable as false by simply reading the primary materials of the era about which they claim to know the real truth. It’s time we recognize the harm this group has done and leave them behind, in history, where they belong.

Jesus Is Not Inferior To White Supremacy