Dallas Cowboys owner Jerry Jones admitted as much about Jay-Z’s role in the 2015 Dez Bryant $70 million deal according to Yahoo Sports.

In a recent televised conversation with finance network, Cheddar, Jones, speaking about the current partnership between Jay-Z and the NFL, (as seen via this Twitter conversation) says, “Jay-Z, bar none, is in the top five of anyone I’ve ever met. His style, his demeanor, the quality of the person he is, he’s just outstanding.” He then praises Jay-Z as being “so diligent over the years as Dez Bryant’s agent.” 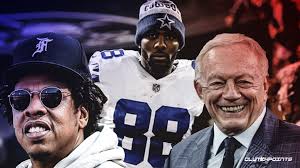 “I negotiated personally with Jay-Z on Dez Bryant’s contract. We actually were at the 21 Club. We started about 12 midnight and we finished about five in the morning. We negotiated down in the wine cellar Dez Bryant’s contract.” Except that, Jay-Z, although owning his own sports agency, Roc Nation Sports, the rapper himself is not a certified agent, which would have brought complications for Jerry Jones if the league knew back in 2015.

According to the NFL’s collective bargaining agreement, “Clubs are prohibited from engaging in individual contract negotiations with any agent who is not listed by the NFLPA as being duly certified by the NFLPA in accordance with its role as exclusive bargaining agent for NFL players,” Article 48, Section 1.

As a Roc Nation client, on July 15, 2015, Bryant agreed to a five-year, $70 million contract with $45 million in guaranteed money and a $20 million signing bonus. The Cowboys released him on April 13, 2018, after playing eight seasons with the team. On Nov. 7, 2018, Bryant agreed to a one-year, $1.25 million deal with the New Orleans Saints and 2 days later, he tore his Achilles tendon during team practice and was lost for the year. He is currently a free agent.

Jones’ admiration for the billionaire rapper was just as high back on July 17, 2015, as he told the Washington Post at the time, “Jay-Z certainly is a great example there,” Jones repeated. “He’s obviously very astute and not just talented and … He’s outstanding. I’ve had chance to spend some personal time with him and I am convinced that this is what he’s got at stake … to step out of bounds with Dez it’s a step out of bounds with Roc Nation and Jay-Z. He doesn’t want that to happen.”

Smokey Robinson talks about Bob Dylan, ‘My Girl’ and why he doesn’t like the term ‘African American’

‘Show It Off, Sis’: Phaedra Parks Applauded for Her ‘Naturally Brown...