Florida cannot prevent people with felony convictions from registering to vote if they cannot pay fines and other costs stemming from their convictions, a federal judge ruled on Friday, temporarily blocking a state law that civil rights’ groups have called an unconstitutional “poll tax.”

The ruling was a rebuke to the state’s Republican governor, Ron DeSantis, and its Republican-controlled Legislature. Legislators had enacted a law requiring the fine and fee payments this year after voters resoundingly approved an amendment to the State Constitution that restored voting rights to as many as 1.5 million former felons.

The law was widely seen as an attempt to suppress voting by the former felons, many of them African-Americans or Hispanics who appeared likely to support Democrats.

The injunction technically affects only 17 plaintiffs in the suit challenging the law, all of whom said they lacked the money to pay costs stemming from their convictions. But the principle behind the ruling applies to all people convicted of felonies and will require the state to change its repayment policy if it stands, said Julie Ebenstein, a senior staff attorney with the American Civil Liberties Union.

Evidence in the lawsuit indicated that roughly four in five felons who have completed their sentences had unpaid fines, court costs or restitution to victims of their crimes. 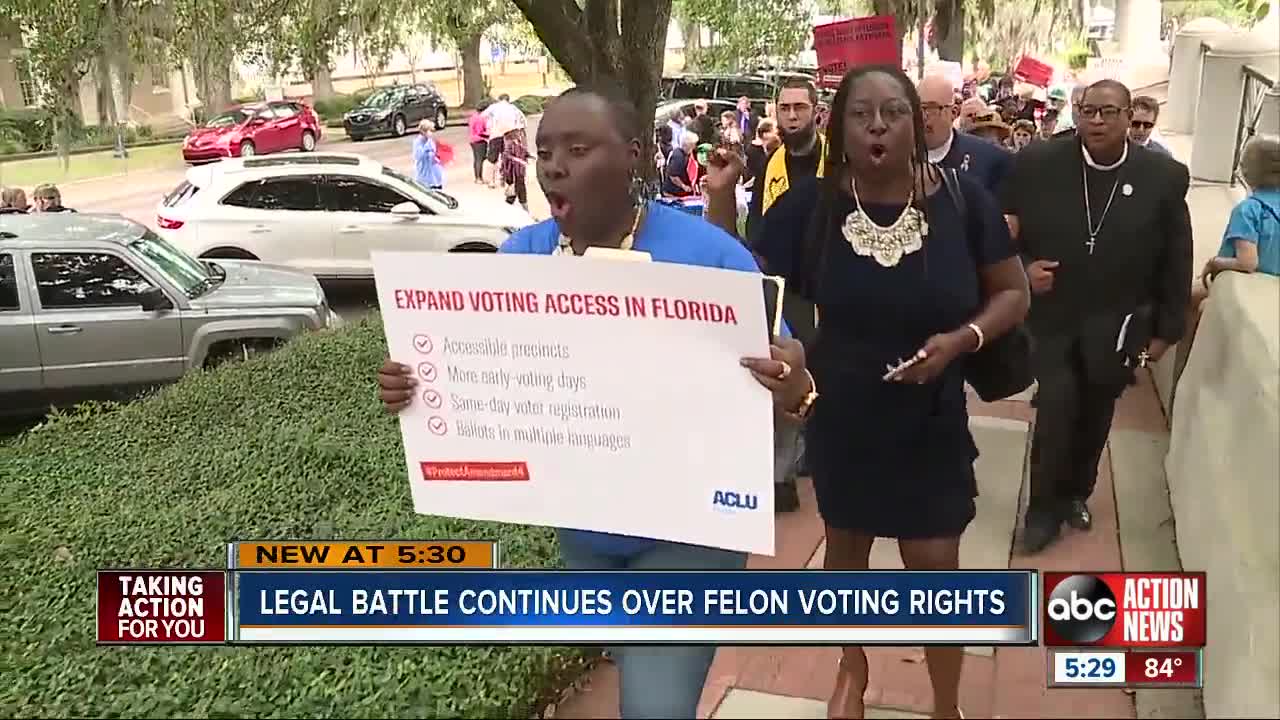 “People can’t be disenfranchised for outstanding legal financial obligations that they are unable to pay” she said. “Even though the ruling applies only to the individual plaintiffs, the process is obviously problematic” regardless of whom it is applied to.

Voting rights advocates who sought Friday’s ruling hailed the injunction as a crucial step toward limiting the Legislature’s effort to restrict access to the ballot.

The decision is “a critical step towards ensuring that the voting rights of other people with felony convictions are not trampled on by Florida officials,” Leah Aden, the deputy director of litigation for the NAACP Legal Defense and Educational Fund, said in a statement. “We will continue to fight for full relief for Florida voters who must not pay to vote.”

Florida officials had no immediate response to the ruling by Judge Robert L. Hinkle of the United States District Court in Tallahassee. The state could challenge the injunction in a higher court, change the law when the Legislature convenes next year or postpone action until a trial in the lawsuit, now scheduled for April, produces a definitive ruling on the law’s legality.

Floridians restored the voting rights of felons who had completed their sentences — except those convicted of murder or sex offenses — in a referendum last November that passed with the backing of nearly 65 percent of voters. The Legislature sought to blunt the effect of the vote by passing a law that included any court-imposed financial obligations linked to a felony in the definition of “sentence.”

The legislators went even further by specifying that those obligations included fines and other costs that had been converted to civil liens, a common court practice applied to costs that felons are unable to pay. Civil liens cancel the criminal nature of the obligations, converting them to ordinary debts like loans or credit card purchases.

By requiring people with felony convictions to pay legal obligations before registering to vote, the lawsuit’s plaintiffs had argued, Florida legislators had effectively created a modern version of the notorious poll taxes used to disenfranchise African-Americans during the Jim Crow era. The United States Constitution’s 24th Amendment did away with the practice, stating that the right to vote in a federal election could not be denied for failure to pay “any poll tax or other tax.”

In his ruling, Judge Hinkle, who was appointed by President Bill Clinton in 1996, left open the question of whether the repayment provisions were in fact a poll tax.

He noted that the drafters of the constitutional amendment approved in November had indicated to the state Supreme Court that fines and other court costs were indeed considered part of a sentence, but he said that it was up to Florida courts to decide whether the amendment approved by voters required their repayment.

In any case, the judge said, it was clear that states have the right to deny voting privileges to people who can afford to pay such costs but choose not to.

But Judge Hinkle said the law was equally clear that Florida cannot refuse to restore a former felon’s voting rights simply because the felon is unable to pay legal debts. In fact, he wrote, a 2005 ruling in the United States Court of Appeals for the 11th Circuit involving a Florida felon who was unable to pay restitution stated that “access to the franchise cannot be made to depend on an individual’s financial resources.”

The state can investigate whether a former felon’s claim of poverty is legitimate, the judge wrote, and can establish a process for deciding whether and how voting rights should be restored. But “what the state cannot do,” he wrote, “is deny the right to vote to a felon who would be allowed to vote but for the failure to pay amounts the felon has been genuinely unable to pay.”

Under the preliminary injunction, the judge wrote, the 17 former felons who are plaintiffs in the case can seek to regain their voting rights by proving to the state that they are unable to pay their legal debts.

“When an eligible citizen misses an opportunity to vote, the opportunity is gone forever; the vote cannot later be cast,” he wrote, adding: “Each of these plaintiffs have a constitutional right to vote so long as the state’s only reason for denying the vote is failure to pay an amount the plaintiff is genuinely unable to pay. The preliminary injunction is necessary to prevent irreparable harm to any such plaintiff.”

Micah Kubic, the executive director of the A.C.L.U. of Florida, hailed the ruling.

“The court’s decision is clear: The right to vote cannot be denied to anyone based on their inability to pay,” he said in a statement. “The state must create a clear and unencumbered process that provides Florida’s returning citizens the ability to vote. This is an important win for our democracy.”

Perry on Ukraine efforts: ‘There was no quid pro quo’

Is Yang Doing More Harm Than Good to the Case for a Universal Basic Income?