Kawhi Leonard hasn’t even played his first NBA game as a member of the Los Angeles Clippers and he’s already broken a record in the city.

But he did it off the court by spearheading the biggest backpack giveaway in Los Angeles Unified School District’s history. And he was helped by the nonprofit Baby2Baby, as well as the L.A. Clippers Foundation.

The goal is to give a free backpack to every student in LAUSD, as well as students in Inglewood Unified and Moreno Valley Unified School Districts, which is in Leonard’s hometown.

Because statistics show that 80 percent of K-12 students in LAUSD alone either came from a low-income family, were in a foster program or were homeless last year, according to a Clippers press release. 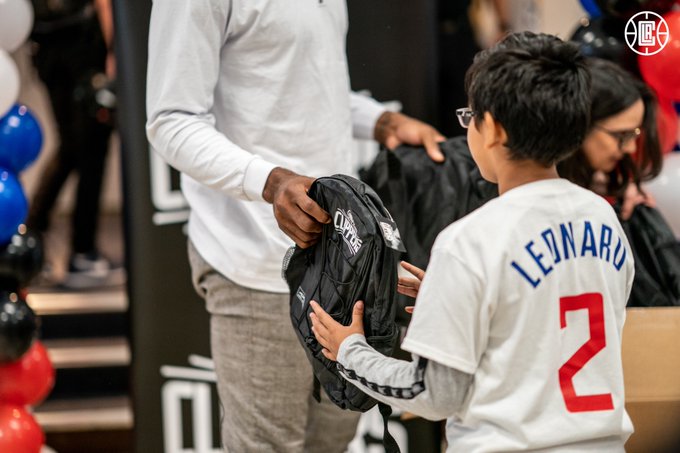 On Tuesday Leonard talked about the giveaway at Cloverdale Elementary School, where he attended as a child. He then made his way to 107th Street Elementary School in the Los Angeles neighborhood of Watts to hand out backpacks, since it was LAUSD’s first day.

“My goal this year is to make a meaningful contribution both on and off the court,” Leonard explained. “This felt like the right way to get started. It was important to me to make this announcement in my hometown of Moreno Valley at my former Elementary School, but the benefits this program will have across all of Los Angeles makes today even more special.”

The idea behind the giveaway is that families could use the money they would normally spend on a backpack for other necessities like food, rent or utilities.

“We are overwhelmed with gratitude to the Clippers and Kawhi Leonard for this record-breaking donation to every student in Los Angeles Unified School District and beyond,” said Baby2Baby Co-Presidents Kelly Sawyer Patricof and Norah Weinstein in a statement.

“For many of these children who are homeless or in foster care, backpacks not only hold their school books and homework, but also all of their personal belongings.”

“If they have a backpack at all, it is often falling apart, and when a child does not have one, they resort to using a grocery or trash bag. The Clippers’ donation will make these children feel the pride they deserve and give them the confidence they need to start the school year off on the right foot,” they added.

‘It’s Not Even a Question Anymore’: Spike Lee Speaks on Donald Trump Being a White Supremacist

Muller Report & President Donald Trumpa:" What If This Was President Obama?"

God Is Our Shepard

Join Us at Black Men XCEL To Honor Jesse Jackson, Our Champion For Equal Opportunity

Arthur Ashe, the 1960s black tennis star whose life was cut short by blood transfusion that led to AIDS