A day after Jerry Falwell Jr., president of Liberty University in Virginia, tweeted an image of a face mask depicting figures in blackface and dressed as a Klansman, Christopher House, an online instructor for the university, announced his resignation on Facebook.

House, a Pentecostal pastor and an associate professor of communication studies at Ithaca College, responded to Falwell’s tweet, “As an African American man and Christian pastor, I am horrified and appalled that the president of the largest Christian university in the world would knowingly and intentionally use images that evoke a deep history of racial terror for people of color in the U.S., specifically individuals who look like me, for the purpose of a political statement to the Governor of Virginia.”

Falwell’s May 27 tweet, seemingly intended as a jab at Virginia Gov. Ralph Northam, who was accused last year of wearing black face as a medical student in the 1980s, followed Northam’s order last week requiring masks to be worn in public indoor spaces, effective May 29. 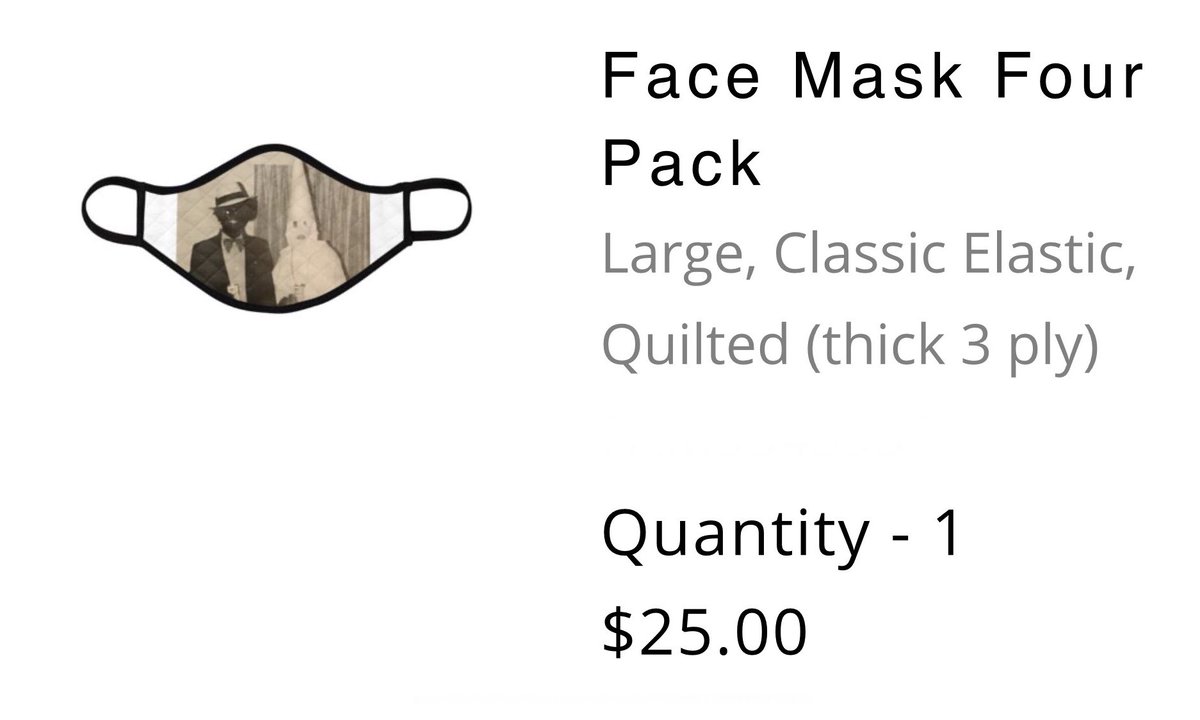 Falwell, who succeeded his father, Jerry Falwell Sr., as president of the evangelical university, has been under fire from local authorities for opening the Liberty campus at the end of spring break despite their advice to self-isolate and avoid gathering. In interviews he has minimized the danger of the virus.

The same day he tweeted the blackface images, Falwell was quoted in a tweet from the Falkirk Center for Faith and Liberty, a think tank Falwell cofounded last year, saying that Northam’s “ilk needs fear and crisis as an excuse to bolster their power and limit individual freedom.”

House joined Liberty University online — a key moneymaker for the university that enrolls about 85,000 of its total student body of 100,000 —  last year to teach an intercultural communications class. “I was brought in to teach Liberty students about meaningful conversations around race and racism, to help them understand the very thing their president reinforces by drawing on these images of racial terror,” House told Religion News Service.

House described how recent acts of racial violence make Falwell’s tweet particularly abhorrent: “For him to use those images right now in this moment when black and brown communities are grieving the murder of George Floyd is pure evil, ungodly and immoral.”

House said that Falwell’s tweets “undermine my very presence in the online classroom, because those images were created to perpetuate the presumed incompetence of black folks in any classroom.”

In his Twitter thread, Falwell said the image was designed to expose racism in Northam’s political party. “Just a way to shine a spotlight on the fact that Democrats are and always have been the real racists in this country,” he wrote.

Liberty University has not responded to a request for comment on House’s resignation.

Since House’s announcement, many students and faculty have thanked him for taking a stand.

Danielle Cloos, a former Liberty student who was a member of the university’s Center for Multicultural Enrichment, said in an interview, “(Liberty is) supposed to be training champions for Christ, but they are quickly losing sight of that. Any faculty member trying to cultivate that mission will have a very hard time doing so with Jerry Falwell as leader of the institution.”

“I don’t believe Liberty fosters a healthy environment for minority students, specifically. Their political agenda is too strong,” said Cloos, who took a bachelor’s and master’s degree, leaving in 2019.

Chris Moore, who graduated from Liberty in 2018, and another former member of the university’s Center for Multicultural Enrichment said, “Just the thought of that imagery anywhere, but especially on a mask that’s supposed to be used for protection, is very disturbing.”

Moore told RNS that he had a positive experience at Liberty but that being an African American Liberty alumni can be complicated because “it feels like we’re held responsible for every comment that Falwell says.”

A professor in House’s department at Liberty who requested anonymity for fear of retribution from the administration told RNS, “We need to tell the students, everybody doesn’t practice Christianity the same way. There are people who practice Christianity in a way that’s different than the way Liberty espouses. We value human beings, value the humanity of all people.” Liberty professors teach under one-year contracts, as the university does not provide tenure.

House said he recognizes how his tenured position at Ithaca makes it easier for him to speak out and resign than for others but hopes his act sends a message.

“I hope people realize Jerry Falwell does not represent the God of the Bible or Jesus of the Bible,” House said. “God is a God of liberation and justice, who has declared we are all created in the image of God. To use images that individuals are anything less than the image of God is inexcusable.”

African Countries Still Pay Over $500 Billion as Colonial Tax to...