Can there be light in a world filled with so much darkness?  But is that a good question?  Can we reliably measure the difference between light  and darkness?  This is not a question about black and white people; it’s about norms, morals and the events that shape our lives.  Where is the light that shines, and where is the darkness that blinds? Is there a spring light or a well rooted in darkness that sustains life?

Light In The Night

“Never had any money; didn’t know what it was. Mammy was a house woman, and I got just what do white chilling got to eat, only a little bit later, in de kitchen.  There was fifty or sixty other little niggers on de place. Want to know how they was fed? Well, it was like dis; You’ve seen pig troughs, side by side, in a big lot? After all de grown niggers eat and git out de way, scraps and everything eatable was put in them trough; sometimes buttermilk poured on de mess and sometimes potlicker. Then de cook blowed a cow horn. Quick as lightnin’ a passel of fifty of sixty little niggers run out de plum bushes, from under de sheds and houses, and from everywhere. Each one take his place, and souse his hands in de mixture and eat just like you see pigs shaven round slop troughs. I see dat sight many times in my dreams, old as I is, eighty-two years last Saturday.”

There much more to the interview, but this part of Robert Toately interview caused me to stop and stand still, reflect and think.  Food scrapping poured in a trough, and the cow horn blows. It’s dawn and no children are in sight, but the cow horn blows. Suddenly out of dark, hidden in seemly underground places emerge little niggers; from under houses, under sheds, and from the shadows of plum trees.  Not children, but little niggers run out their place in the night, to a place in the light where a trough, and food for pigs is waiting. 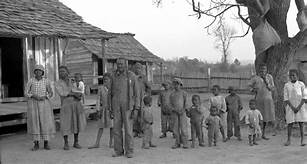 W.E.B. Du Bois, in “The Souls Of Black Folk” talked about “looking at one’s self through the eyes of others.” As the ex-slave looks back over his life, does he have a set of eyes, and ears?  Is he looking through the eyes of intellect, sound mind; or humanity?  When looking in the mirror, what did Robert Toately see? As he peered back over his life, he saw grown niggers, and little niggers. Could he not see mothers, fathers, brothers and sisters; children, friends and neighbors. This, the eyes of the other; can these eyes and have these eyes cast a shadow of blindness over Robert Toatley?  Can he see humanity? Can he see people created in the image and likeness of God?

In the life of Jesus, that is the historical Jesus, who was a man and walked the earth with power and authority, there was light.  The light that entered the earthly realm in Jesus illuminated the love and peace of God.  And, as the love and peace of God illuminated life, we were able to see demons, disease, and death for what they are.  The invisible, sometimes evil, become visible in the light.  The light does not go out; it remains bright; it needs no help, for all by itself, it is light.

When I think about the light that shines on men; out of the vicissitudes of slavery shines the lives of Gabriel Prosser, Denmark Vesey and Nat Turner. Like Sampson, like Moses these men rose up against the darkness of the human heart that denied others the freedom to live has human beings created in the image and likeness of God.  The actions of these men, on the behalf of others is the light; light that illuminates the love of God.  The love that shines brightly in the hearts of human beings is eternal; it is the like that came to life in Jesus Christ; light that has no boundaries.

Perhaps Robert Toatley looked at the lives of those around him through the “eyes of others.” Having spent the early years of his live as a slave, I sense a slaves worldview in the words of Robert.  Slavery was a religious institution in America; it became a way of life by act of a white Christian government.  Acting as a middleman the government commodified black skin; thus, black skin was bartered and sold.

Afro-American Religious History, edited by Milton C. Sernett; he writes, “religion in the south was a mere covering for the most horrid crimes, —a justifier of the most appalling barbarity, — a sanctifier of the most hateful frauds, —and a dark shelter under, which the darkest, foulest, grossest, and most infernal deeds of the slaveholders find the strongest protection.”

Reverend Nat Turner experienced the light for himself. He, like so many others laid down his life for others.  No matter how we view history and life, the light is present. The light came down from heaven and re-established human relations with God.  For those who know and have faith in God, you are the light that comes from above.  Jesus is our inspiration, for he took upon himself human nature to redeem human beings for man made religion.  Jesus is the revelation of power, respect, honor, love and reverence.  Human beings struggled to know and understand life; it became abundantly clear in the life of Jesus Christ. Jesus, we hold our heads high, and look up to you; you are the epitome of life and light.

Black new, white news, people of color news; the Good News, i.e., the Gospel is news for men, women, and child. The Good News is the revelation of Jesus Christ; it is life and light for every nation, every race, and every tribe. John 1:9 says, “The true light that gives light to every man was coming into the world.”

Help Create a Thriving Health Center for Villagers in Tanzania