The Miami Heat has suspended Dion Waiters without pay after he reportedly overdosed on weed edibles ahead of a crucial game against the Lakers this week.

The team made the announcement Sunday in a statement, saying they were disappointed in their star guard’s actions this season … including the “very scary situation” from Thursday night, adding they were grateful that the outcome wasn’t worse.

Miami Heat statement on the suspension of Dion Waiters. Called it a very scary situation on Thursday night. 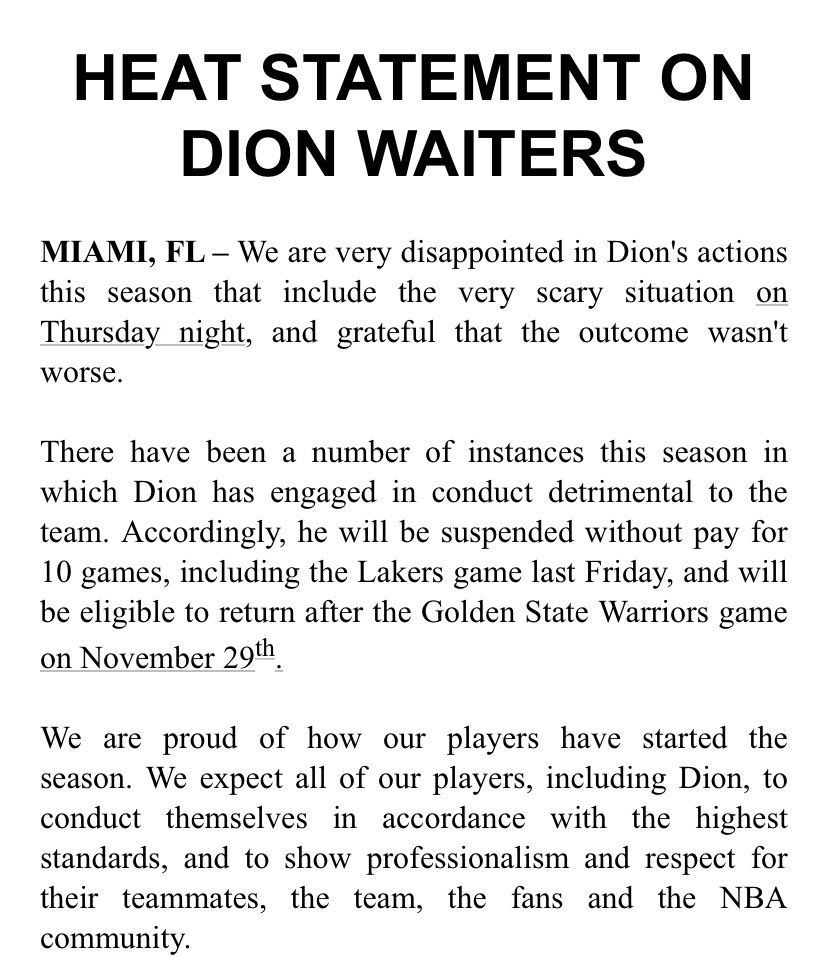 They went on, “There have been a number of instances this season in which Dion has engaged in conduct detrimental to the tea. Accordingly, he will be suspended without pay for 10 games, including the Lakers game last Friday, and will be eligible to return” Nov. 29.

The Heat continued …  “We are proud of how our players have started the season. We expect all of our players, including Dion, to conduct themselves in accordance with the highest standards, and to show professionalism and respect for their teammates, the team, the fans and the NBA community.” The Heat lost Friday’s game, BTW … they’re 6-3 now.

SLATER SCOOP: A Miami Heat player had a medical emergency on their flight from Phoenix to Los Angeles on Thursday night, according to sources.

A Heat spokesman told me the team cannot comment due to medical confidentially laws.

UPDATE: Dion Waiters is the Heat player who had medical emergency on team plane, I’ve confirmed.

Waiters overdosed on “gummies,” sources say, and was passed out when plane landed.

He had a seizure when he was finally woken up, I’m told.

In case you hadn’t heard, Dion had a medical emergency while flying from Phoenix to L.A. on Thursday with the rest of his teammates. He was found unconscious when the plane landed, and when he was finally woken up … he reportedly had a seizure.

According to ESPN, Waiters had consumed edible gummies that were infused with THC.

Adding insult to injury, he had already been suspended for several games prior to this latest disciplinary action. According to reports, he got into it with head coach Erik Spoelstra.

This latest suspension could hurt Waiters more than he might realize … affecting his bottom line. He’s reportedly gonna miss out on a $1.2 million bonus written into his contract if he missed 9 more games than he already had. He signed a $52M contract extension in 2017.