Pic.48. An official welcomes some Nigerians evacuated from South Africa on their arrival at the Murtala Muhammed International Airport, Ikeja, Lagos State on Wednesday (11/9/19). 05942/11/9/2019/Okoya Olatunde/BJO/NAN

Fears of recent xenophobic violence have driven hundreds Nigerians out of South Africa to Nigeria’s largest city of Lagos.

Trial to begin for Omoyele Sowore, a New Jersey journalist imprisoned in his native Nigeria

Nigerian private airline Air Peace offered a free flight from Johannesburg to Lagos on Wednesday to hundreds of Nigerians fleeing South Africa after a recent uptick in attacks on foreign people and their property in South Africa.

“My workshop is damaged. Everything there is burnt, and I just had to run away for my life,” one man told the BBC.

Another woman called xenophobic attacks “an insult to Nigeria.”

“And then it’s a challenge to our leaders,” she said, “because we Nigerians, what makes us travel is that we want better opportunities.”

Although Nigeria’s foreign ministry has said no Nigerians have been killed in the recent violence, CNN reported at least 10 people, including two foreigners, were killed in days of violence, looting and vandalism in South Africa.

The violence boiled over last month when taxi driver Jabu Baloyi was shot and killed by an accused Nigerian drug dealer in the capital city of Pretoria, according to multiple media reports.

The situation sparked looting and destruction throughout Johannesburg, and more than 50 shops and several vehicles were destroyed, Bloomberg reported. 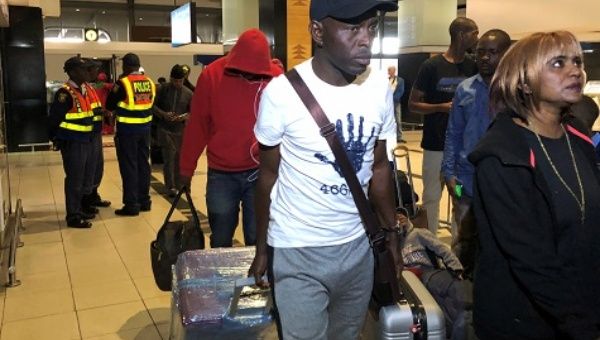 Bus has arrived at OR Tambo Airport. Nigerians are unpacking their bags from the bus to get into the check in queue. Many of them say “It’s time to go home”
Nigerian government has offered a free flight home for those who wish to leave at the back of #XenophobicAttacks pic.twitter.com/oE8tFihVur

The conflict, however is deeper than just a protest gone wrong. For some, it’s the result of growing frustrations about an unequal distribution of wealth in South Africa.

The country attracts residents from poorer nations in search of a better life, and their increased presence in poor neighborhoods has sparked resentment from locals who view foreigners as competitors for jobs and housing, Bloomberg reported.

When Nigerian entrepreneur Dennis Benson spotted a poster calling for a strike of foreign businesses in a Johannesburg suburb, he told CNN he started making plans to leave South Africa.

Second bus has just left. People are still queuing to get onto the next bus. #NigeriansLeaveSA #XenophobicAttacks #Nigerians pic.twitter.com/lNDVxP1MTl

“I packed my bags and went to stay with a Nigerian friend who lives close to the airport because I knew it was going to get bloody,” Benson said. “I have seen other protests.”

In the recent protests, Benson told CNN he was looking for an opportunity to go back home on Sept. 2.

“A supermarket owned by an Ethiopian beside my apartment was looted and destroyed,” he said. “The rioters even took the fridge with drinks. They were chanting that people should go back to their country.”

That resentment, however, is misplaced, South African advocates such as political leader Julius Malema have argued.

“Our anger is directed at wrong people,” Malema said on Twitter. “Like all of us, our African brothers & sisters are selling their cheap labour for survival.”

Nigeria is the top oil and gas producer in Africa. The World Bank states that the oil-rich country is one...

Christians in Kwara state participate in Sunday's marches sponsored by the Christian Association of Nigeria. Having finished his Sunday sermon...

‘If You Are Poor,You Are Guilty Until Proven Innocent’: Usher Speaks Out Against Injustice of Cash Bail System

At just 10 years old, this Nigerian tech genius has been appointed to teach in UK school

The rarely-told story of how civil rights icon W.E.B. Du Bois became a Ghanaian at age 93