Could a social media hashtag – tapping into the energy and anger of the global #BlackLivesMatter phenomenon – help achieve in Zimbabwe what years of street protests, strikes and political campaigns have so clearly failed to do?

Over the last few days, in response to a particularly brutal, public, widespread, and on-going clampdown by security forces, the hashtag #ZimbabweanLivesMatter has gone viral, globally.

Celebrities like rappers Ice Cube, AKA and Lecrae and actresses Thandie Newton and Pearl Thusi have expressed support for – or at least interest in – what appears to be an exploding grassroots campaign against the government of President Emmerson Mnangagwa, the man who took over from former leader Robert Mugabe.

“It captured the imagination of the population. Citizens coming together. I think this is what the whole world felt,” said the novelist Tsitsi Dangarembga of the hashtag and the non-political movement behind it.

She was arrested by troops last Friday, and later charged and released, after taking part in a planned street protest which the government described as an attempted “insurrection” by “terrorists”.

“I was in the holding cells with two men who had been tortured. One has severe kidney damage,” said Ms Dangarembga, who was recently long listed for the prestigious Booker Prize.

“I am just grateful the world has taken the [#ZimbabweanLivesMatter] message seriously. Things seem to be coming to such a head now that it is impossible to look away.”

Much of the growing global social media focus has, it seems certain, been fuelled – as elsewhere – by the spread of mobile phone technology which has enabled activists and citizens to film and broadcast footage of assaults, injuries and other abuses almost in real time.

“The ferocity and broad appeal of the #ZimbabweanLivesMatter campaign has unnerved the regime,” said the prominent journalist Mduduzi Mathuthu, during a phone interview from his hiding place in Zimbabwe. “I’m in my bunker,” he commented dryly.

Last Thursday he fled from his home, fearing for his life, after being alerted about an imminent police raid.

Mathuthu’s nephew was later abducted – allegedly by security agents – and then dumped, badly injured, on the roadside three days later.

“Instead of listening to the legitimate concerns raised by so many Zimbabweans, President Mnangagwa has… discarded the last veneer of a reformist,” Mathuthu said.

“His shock troops have their marching orders and we should brace for a brutal campaign against those demanding change,” he warned.

Indeed, in a televised address on Tuesday, President Mnangagwa made it clear that his security forces would continue to crush dissent.

Portraying the anti-corruption movement as the work of “a few rogue Zimbabweans acting in league with foreign detractors”, he vowed to “defend the motherland from any form of attack”, and warned of “dark forces” and “machinations by destructive terrorist opposition groupings”.

A senior figure in the ruling Zanu-PF party also took to Twitter to push back against the #ZimbabweanLivesMatter hashtag.

He has a point.

“It’s hard to know what will come of this,” conceded Doug Coltart, a human rights lawyer who is representing two men allegedly tortured by police over the weekend.

“The fact that it is doctors, lawyers, students, journalists who are being persecuted and attacked by this regime in some ways makes it an easier cause to get behind, perhaps, than when it’s political activists.

“But we need to see grassroots organizing on a more sophisticated level for a real mass movement to emerge,” Mr Coltart said, citing the relatively short-lived 2016 #ThisFlag campaign. 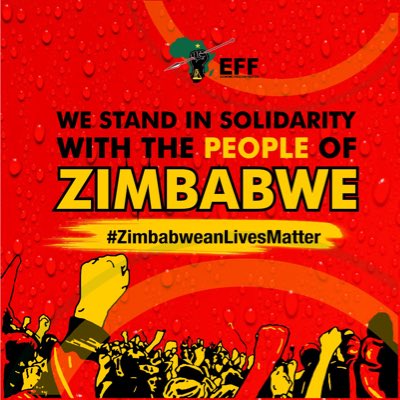 This is in sharp contrast with the governing African National Congress (ANC) which – like many former liberation movements on the continent – has remained reluctant to criticize Zanu-PF.

So where now for Zimbabwe?

“We’re on a precipice, a tipping point. We are [in] the place we were a couple of days before Mugabe left. The people are angry. Leadership is needed,” warned Trevor Ncube, a prominent publisher who sits on the President’s Advisory Council set up last year.

‘Hashtags do come and go’

The military, who led the coup that ousted Mugabe in November 2017, seem likely to play an ever more prominent role in government – as indicated by Tuesday’s appointment of a former army chief to the post of health minister.

“Mnangagwa cannot be safe. It would be insane for him to think he’s safe. There’s no doubt he has lost the confidence and support of the military,” said Jonathan Moyo, an exiled former minister in Mugabe’s government.

“This is now a clueless, corrupt, incompetent government. The economic meltdown is deepening. There’s no coherent approach. People are on their own,” he said.

“Mugabe had his own problems, but people never felt there was no government. With Mugabe gone, we now see in action the real forces behind his [Mr Mnangagwa’s] reign – the machinery of violence, the military,” said Mr Moyo, arguing Mugabe was a “restraining” force, and that the current government had quickly squandered all international goodwill.

In the midst of all this, the #ZimbabweanLivesMatter could yet prove to be a powerful rallying point, a force for change, harnessing popular frustrations.

Or it could be a minor distraction – a spasm of popular anger that is quickly supressed by a brutally authoritarian government seemingly preoccupied by looting public resources during the pandemic, and by its own vicious internal feuds.

“Hashtags do come and go. The clampdown still exists. But now it’s up to us to find ways forward… to sustain this momentum,” said Dangarembga.

“This is a launching pad, a platform from which to begin.”