Matthew Whitaker, from Hackensack, New Jersey, was born prematurely at 24 weeks, weighing 1 pound and 11 ounces. Doctors told his parents Moses and May Whitaker that he had less than a 50 percent chance of survival. He suffered many complications including retinopathy of prematurity, a disease caused by abnormal development of retinal blood vessels in premature infants which can lead to blindness.

His parents thought he wasn’t going to make it, and they did all they could to help him retain his vision. Over the course of two years, Whitaker underwent 11 surgeries. His parents decided to stop the procedures by the end of the second year as they felt “he was going through too much” and “the doctors weren’t seeing it was getting any better,” Whitaker’s dad, Moses, told 60 Minutes in an interview.

Doctors then warned that Whitaker might not be able to speak, walk or crawl since he had lost his eyesight. “…So a lot of his toys and stuff, we had to have sounds, so that he would want to crawl [and] want to reach those things,” Moses explained.

Whitaker did crawl to music. While an infant, he crawled to speakers just to feel the music. And by three years old, he was already exhibiting his musical prowess with a keyboard his grandfather gave to him as a present. Moses is still amazed at what little Whitaker did with that keyboard. To him, most kids do not play with both hands and do not play chords and harmonies but Whitaker did all of those.

Thus, Moses hired a piano teacher for him, who would later be shocked at his talent and creativity. Soon after he started taking his piano lessons, Whitaker, at age 11, began performing before crowds in various clubs and concert halls around the world, and he was doing so while completely blind. This caught the interest of Charles Limb, a surgeon and neuroscientist who has a musical background. Limb was interested in studying Whitaker’s brain to understand how he has mastered his talents. With permission from Whitaker’s parents, he took the young prodigy to an MRI facility at the University of California, San Francisco, where he put him through a scanner with a small keyboard and asked him to play while the device took images of his brain. Whitaker also got involved in auditory tests while completing the MRI brain scan.

Scientists found that when the teen hears music, his entire visual cortex — the region that processes visual information — becomes activated. “Because he is blind we looked at his visual cortex. And we didn’t see any significant activity there at all,” Limb explained to 60 Minutes of the scans while Whitaker was listening to the lecture. “Then we switched the soundtrack for him and we put on a band that he knows quite well. … This is what changes in his brain.”

Limb and his team found that Whitaker’s entire brain is stimulated by music. They said it seems his brain is using the visual cortex region that is not being stimulated by sight to help him perceive music. “It’s sort of borrowing that part of the brain and rewiring it to help him hear music,” Limb said.

Whitaker thinks the results of his brain scans prove what he already knows — the fact that he loves music. And it is that love for music that has taken him to various tours both in the U.S. and abroad — in Italy, France, Indonesia, UK, Japan, Germany and Morocco. 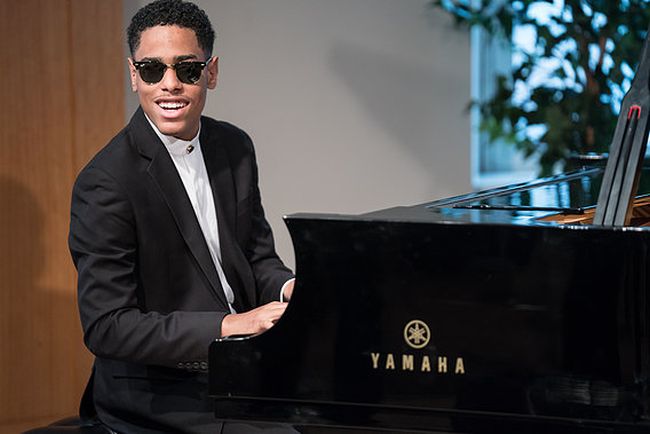 The 19-year-old, who previously studied at The Harlem School of the Arts, has performed before The Youth Assembly at the United Nations headquarters in NYC, the Apollo Theater, Carnegie Hall, and Jazz at Lincoln Center in NYC, among others. At just 10 years old, he was invited to perform at Stevie Wonder’s induction into the Apollo Theater’s Hall of Fame — a year after he had taught himself how to play the Hammond B3 organ.

Having composed scores of original compositions, he recently appeared at the New Orleans Jazz Festival for the first time. Apollo Theater’s Amateur Night Producer Marion J. Caffey once said of Whitaker: “As composer, arranger and musician, Matthew Whitaker is beyond his years and focused on sharing his gifts and joy with the world. Enjoy, with the knowledge that there is more to come.”