by and published by Robert Dighton, hand-coloured etching, published January 1812

Centuries before Joe Frazier, Mike Tyson or even the greatest Mohammed Ali graced the boxing ring, a black slave called Molineaux and entertained his masters from the farm he was born on.

His great desire to fight and win led to his eventual freedom but not so much as the best end of the life of such a legend.

Molineaux was born a slave on a plantation farm in Virginia in 1784 and with his strong fists, he fought many other slaves in what was a great source of entertainment for the local plantation owners whom he slaved for. 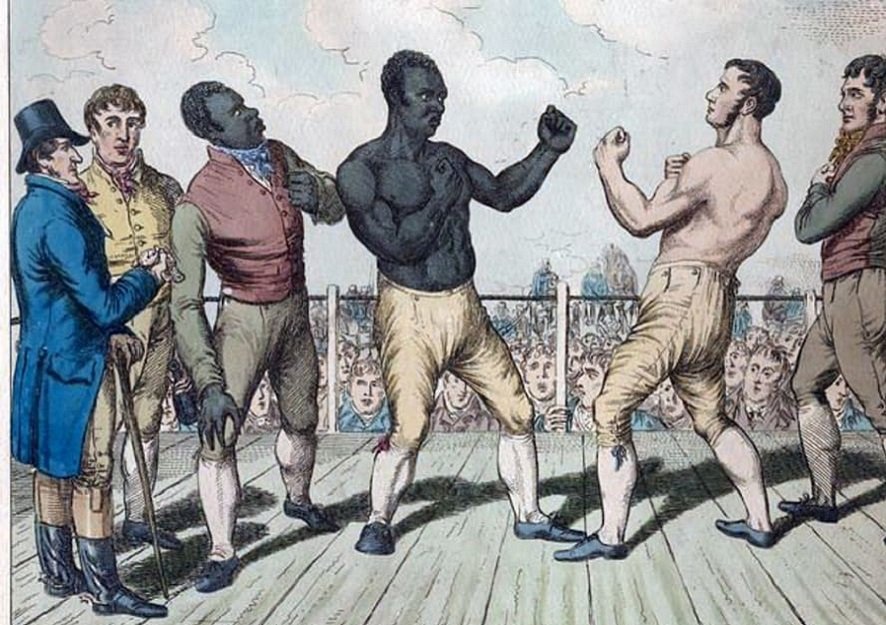 The bare-knuckle boxer’s knack for the sport grew more and more until one day, he made history. Molineaux fought and won a fight against another slave, pulling in a huge sum of money in bets (some accounts say his master won a total of from that fight).

This was something that had never happened before and as promised him before the fight, his master granted him his freedom plus a sum of $500 as a reward from being victorious in that fight.

The man known today as America’s first boxing star, Molineaux, moved immediately after gaining his independence, to New York City but there are unsubstantiated rumours that his victory in that fight is owed to the training and guidance he received in the ring by George Washington, a neighbouring plantation owner.

Around 1804, while in New York City, Molineaux continued honing his bare-knuckle fighting skills and although the details are sketchy, it is believed that the young pugilist carved out a name for himself, soon earning the title of

For five years, he polished his craft in the city, gaining recognition and making a name for himself but then, he felt that it was time to take his talent across the pond to England.

“He was the first American to rise to the eminence of an international challenger,” journalist Paul Magriel wrote in a 1951 edition of the journal Phylon [].

By this time in his trade, Molineaux had moved beyond the basic hunger to meet new competition; the financial factor had become an even stronger urge pushing him to go out. Already, in Britain at the time, boxing came with big money and so that was his destination.

Though the sport was technically illegal, it was well-respected and well-attended. It also had a set of well-defined rules, which Brian Phillips wrote about in a  for Grantland:

“Bouts were held outdoors, on bare ground, in rings marked off from fields. The fighters wore no gloves, which probably made them safer. (Gloves were introduced to protect the hands, not the head, and allowed fighters to punch harder.) But rounds didn’t end until one man or the other went down. And there was no limit to the number of rounds that could be fought. After a fall, fighters had 30 seconds to return to the scratch, a mark in the middle of the ring.”

At the time, Tom Cribb, an English-born, was considered Europe’s best boxer who routinely drew tens of thousands of spectators to his matches. Molineaux knew it was a tough challenge but he vowed to fight Cribb and win.

And so he did and won. First, he met a fellow American boxing aficionado—and ex-slave—named Bill Richmond. Richmond, who was considered one of the world’s first black sporting celebrities, was also a highly in-demand trainer; he agreed to take Molineaux under his wing.

The duo was a perfect fit. With Richmond’s help, Molineaux began to vanquish his opponents fight after fight. In one match, he beat a man so badly that it was impossible to discern his facial features.

“The amateurs were completely astonished at the improvement exhibited by Molineaux, and the punishment he dealt out was so truly tremendous, and his strength and bottom so superior, that he was deemed a proper match for the champion, Tom Cribb,”  Pierce Egan, a celebrated journalist of the time, in his book Boxiana.

It was going to be an unforgettable match anyway and so the date for this momentous match was set for December 18, 1810. And although it is reported that it rained on the day, more than 5000 people attended nonetheless, including some of the first professional sportswriters. Long before the first punch was thrown, the pro-Cribb crowd began hurling racist invectives at the black American fighter.

It was a bare-knuckle fight, as was customary. It was The two men battered each other so badly — a black man and a white man — that spectators were unable to tell them apart.

During the fight, back to back, Molineaux knocked the English champion down. At one point, Molineaux held Cribb in a legal headlock, and the fight’s action stalled. Dozens, possibly hundreds of impatient fans, unable to look on, stormed the ring and

Regardless, the American continued to dominate anyway. And being the practice that the fight should go on until one person was down, this fight, described by Pierce Egan as “The most dreadful affront to British sportsmanship ever witnessed,” travelled a total of 44 rounds.

By the 27th round, many believed that Molineaux should have already been after Cribb fell and failed to get back up after the required 30 seconds. The referees, however, overlooked this and allowed the fight to continue. 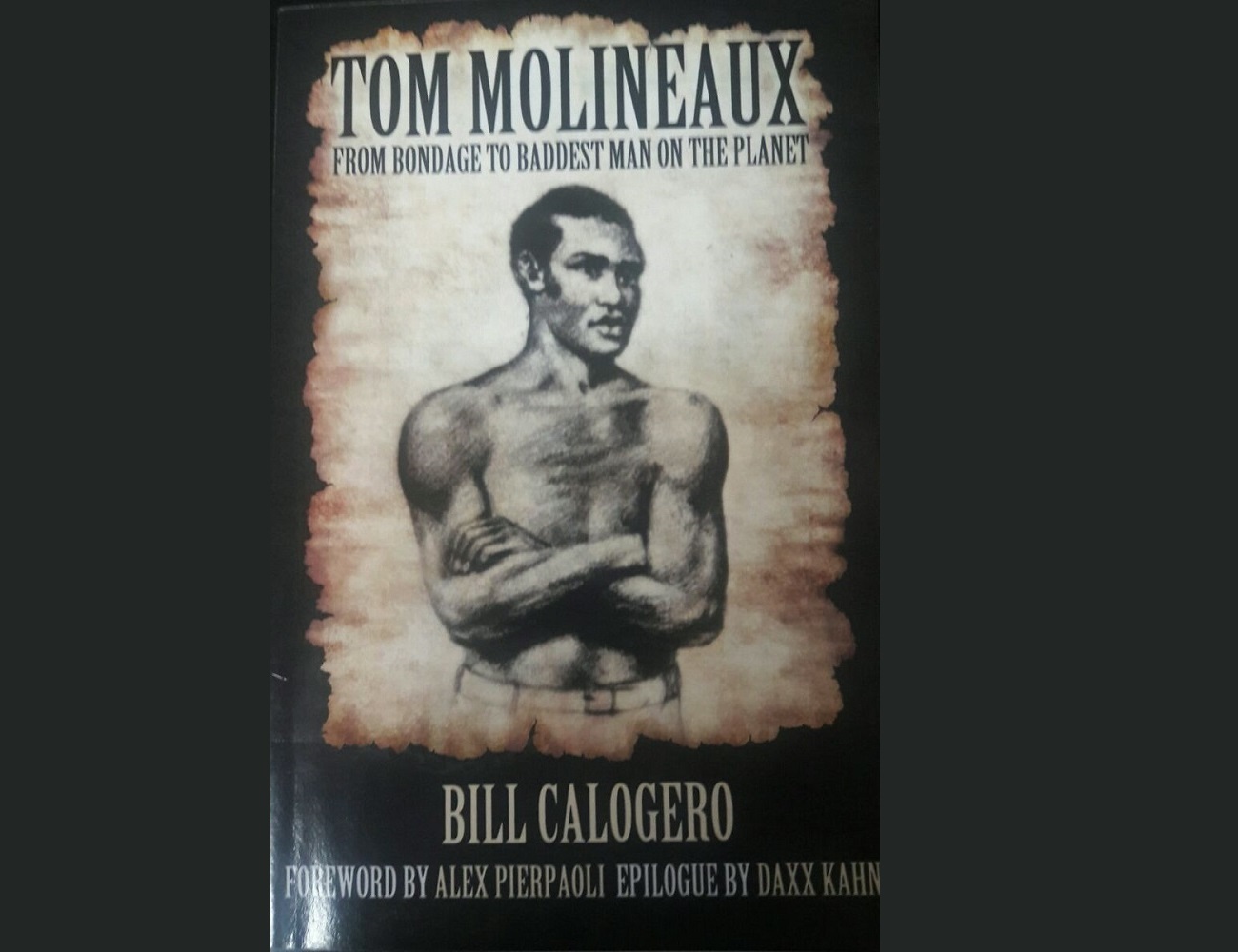 After what seemed like a restart of the fight, soon, the momentum shifted and Cribb gained the upper-hand in the match. Successfully landing a few punches, he was able to injure and weaken the already swollen-eyed Molineaux.

Staggering along the way by now, Molineaux’s strength and sharpness were almost gone. After 44 rounds, Cribb was declared the winner, sending the crowd nuts.

Unsatisfied by the results of the fight, Molineaux sent Cribb a letter days after, asking for . A second fight, which occurred approximately nine months later on September 18, 1811, was attended by more than 15,000 people. This time, Cribb out-trained the American and defeated Molineaux in 11 rounds.

In 1815, after his stardom had waned on the British boxing scene, Molineaux moved to Ireland where a thriving and vibrant boxing environment welcomed him.

Although he made much smaller monies in his fights there, he continued to slip the social scale and with a rising addiction to drinking and womanizing, his body crumbled to TB.

In 1818, Tom Molineaux died. He had spent his last year or two in Galway, where he fought in Eyre Square and other market squares, alongside competing Sunday attractions like badger-baiting and cock-fighting.

Centuries after, specifically in 1997, the International Boxing Hall of Fame Tom Molineaux into its industry, affirming the fact that he was one of the best to have graced the ring.

Jesus Me, And Life