The Trump team’s aggressive anti-impeachment Facebook ad campaign dwarfs its total Facebook ad spending throughout the first three weeks of September, which was just over $640,000, according to digital firm ACRONYM’s analysis of Facebook’s ad data.

The increase in ad spending also comes on the heels of the end of the third fundraising quarter on Monday.

Trump’s ads featured messaging that echoes arguments made by the president and his allies to discredit the impeachment effort, while also fundraising off the president’s latest perilous crisis. 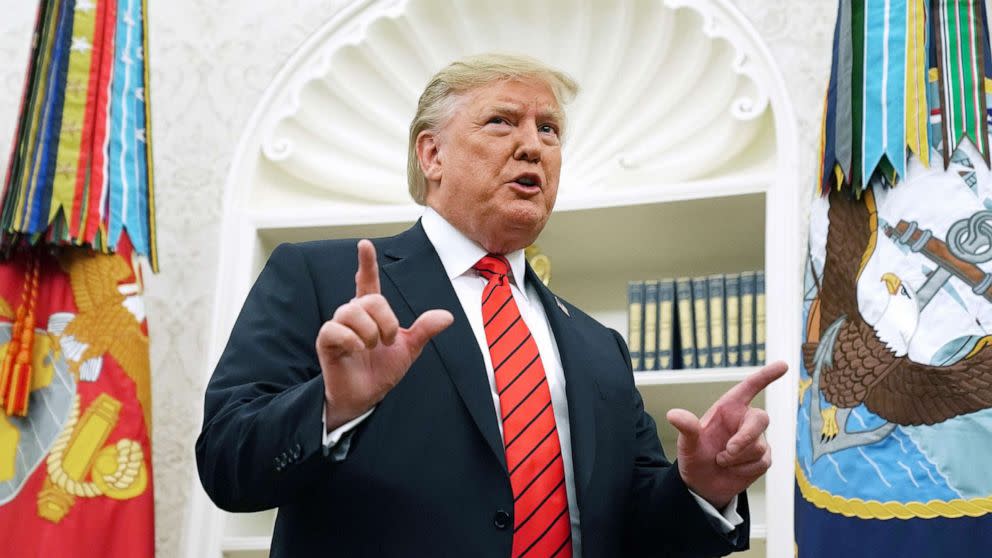 One ad argues the impeachment push has “nothing” to do with the president but is instead a way for Democrats to silence and intimidate Trump voters. “They want to take YOUR VOTE away,” reads one ad. Other ads launched familiar attacks against the president’s 2020 Democratic rivals. “The BIG GOVERNMENT SOCIALISTS like Sleepy Joe, Crazy Bernie, and Pocahontas know they can’t win,” one ad reads.

“If Democrats outraise us, they will be able to dominate the airwaves with their crazy IMPEACHMENT WITCH HUNT,” another add reads.

Since Democrats moved forward with an impeachment inquiry, the president has tweeted similar arguments against impeachment. “The Greatest Witch Hunt in the history of our Country!” the president tweeted Monday.

The ads also ask supporters to donate to the campaign in order to join an “Impeachment Defense Task Force” — a tactic that’s helped the campaign and the Republican National Committee raise $15 million as of Sept. 27.

The Trump campaign declined to comment when asked by ABC News.

Last Friday, the campaign announced a $10 million ad blitz pushing back on impeachment, $2 million of which is coming from the RNC. The RNC told ABC News that this ad is the committee’s first television ad buy in eight years. Ads began airing Sunday in 25 to 50 House districts.

The latest ad buy trounces any TV ad purchase the campaign has done yet in 2019. So far, the Trump campaign has spent less than $300,000 on network and national cable television ads, according to ad firm CMAG’s television ad data.

UGANDA Lawyers for Ugandan opposition leader Bobi Wine filed a challenge in the Supreme Court on Monday against President Yoweri...

‘If You Are Poor,You Are Guilty Until Proven Innocent’: Usher Speaks Out Against Injustice of Cash Bail System

The Fear Of Jesus