No Result
View All Result
Home News And Culture

The signs that beckon Americans as they head west toward Andrade, California’s narrow border crossing, aren’t for resorts or beaches but for dental clinics offering bridges and root canals at half what they cost in the United States. Dental care has become big business here over the last two decades, so much so that American visitors have taken to calling it “Molar City.” An estimated 600 dentists operate out of hundreds of clinics that fill the 1-square-mile town, which is home to fewer than 5,000 permanent residents. 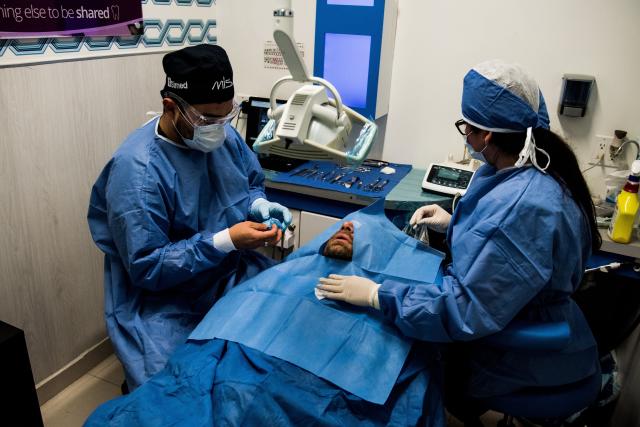 When HuffPost visited in October, the busy season for dental tourism was just beginning. Americans, mostly retirees, were already walking the maze of streets, visiting gift shops for local handicrafts and pharmacies for low-cost prescription drugs. 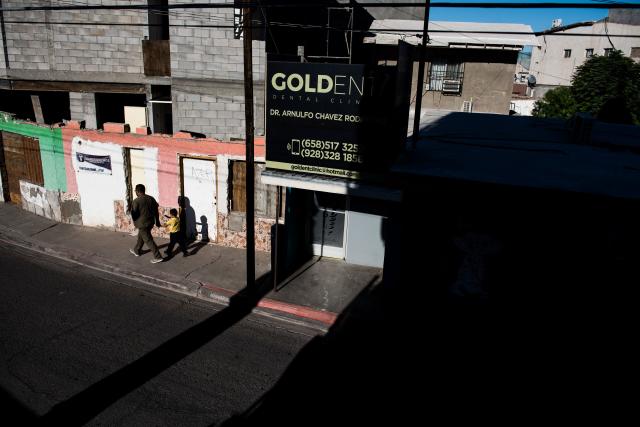 Los Algodones is the northernmost town in Baja California and in Mexico itself, bordered by California to the north and by Arizona to the east. It’s just a 14-mile drive from the airport in Yuma, Arizona.

The clinics are the main reason Americans and, to a lesser extent, Canadians, travel to this village. There’s not much else here. The few restaurants in town close early, and the nightlife consists of two strip clubs. The residents are poor, and these dental clinics aren’t for them. Although the medical tourism boom has provided jobs to many area residents, others hustle as jaladores for tips from clinics and other businesses for luring pedestrians to them.

The town’s lack of amenities did not matter to retiree Eugene Richardson, 76, who drove 2,000 miles from Isle, Minnesota, with his wife, Carol, so they could both get treatment at Sani Dental Group, the town’s biggest operator.

Richardson had worked as a machinist for 30 years, and the vibrating equipment had ground down his teeth, he said. He needed all 28 teeth replaced with crowns but couldn’t afford what dentists in Minnesota charge, so in 2016, he headed to Los Algodones

“I paid for those 28 caps one-fifth what I would’ve had to pay up in the States. It’s sad,” Richardson said. The October trip was his second to Los Algodones to have some of the crowns adjusted while Carol also got some dental work done.

The Richardsons don’t have dental insurance. “By the time you pay your premiums for a year, what it gives you is just it helps with the cleaning but it doesn’t do anything for the major work,” he said. 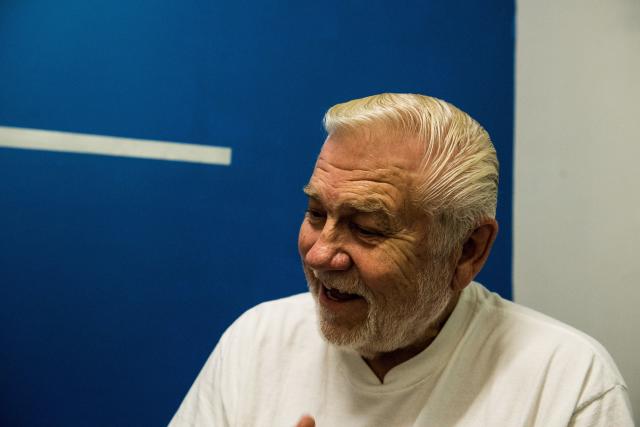 Older Americans are even less likely to be covered by dental plans, largely because Medicare doesn’t cover dental. Using survey information from the federal Centers for Medicare and Medicaid Services, the Henry J. KaIser Family Foundation reports that 65% of Medicare enrollees had no dental insurance in 2016. Almost half of people with Medicare didn’t visit a dentist that year. Yet 1 in 5 Medicare enrollees spent more than $1,000 on dental treatments.

Even people with dental insurance can face big out-of-pocket costs. Dental plans typically offer generous coverage for checkups and cleanings but require patients to pay a significant portion of the cost for major work, such as crowns and root canals. Dental plans commonly feature hard-dollar annual limits on coverage, meaning benefits may cease once a patient’s costs have reached as little as $1,000. Options such as dental implants, an alternative to dentures, often aren’t covered at all. 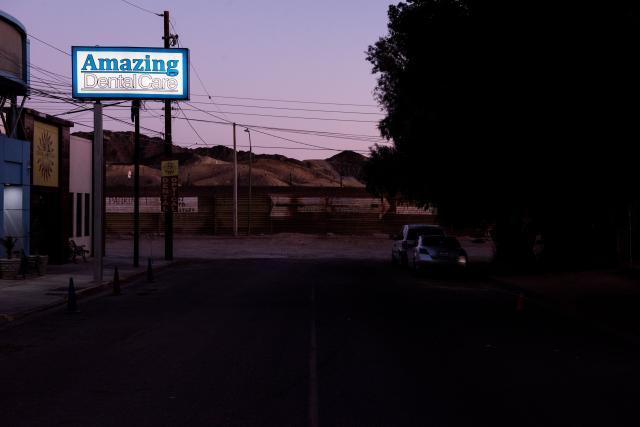 About 1 million Americans and Canadians travel abroad for medical or dental care every year, according to “Patients Beyond Borders,” a guidebook for those seeking health care abroad. That amounts to almost 10% of all medical tourists in the world.

“It’s cost, cost, cost,” said Josef Woodman, the guide’s Chapel Hill, North Carolina-based author and founder of an organization by the same name. “The cost is prohibitive for so many Americans.”

Sixty-five percent of medical tourism is for dental care, Woodman said, based on his organization’s research.

“All of this has to go with our incredibly broken health care system. Nobody wants to travel for care to a far-flung land and be in pain without relatives and loved ones around,” he said. “They’re being forced into it financially and by the shortcomings of the system.”

The savings can be significant. A bridge containing four implants to replace lost teeth cost an average of $21,500 in the United States last year, according to data collected by Patients Beyond Borders. The average cost in Mexico is $9,300, not counting travel expenses.

But even at around half the cost of U.S. dental care, patients still must have the financial means to travel to a foreign country and the flexibility to miss work for days spent getting treatment and recovering. 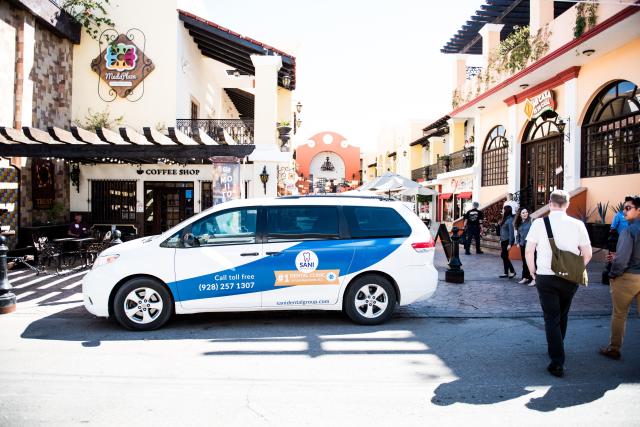 Patients Beyond Borders offers information about medical tourism destinations and advice on how to choose a quality provider. Patient testimonials on the internet are another useful resource, Woodman said.

Dental care is less expensive in Mexico for several reasons, said Deepak Datta, a business professor at the University of Texas at Arlington and the CEO of Dallas-based Medical Tourism Co., an agency that connects its mainly American customers to treatments in countries including Mexico, Costa Rica, Thailand and India.

“Primarily, the reason medical care is cheaper in these countries is the cost of running the business or a hospital or a clinic or even a doctor’s office is quite low compared to what it would be in the U.S,” Datta said. That includes the cost of labor and medical malpractice premiums, he said. In addition, medical and dental students in Mexico don’t graduate with student loan debt like Americans do and therefore don’t pass those costs on to patients, he said.

Sani Dental Group is the largest dental provider in Baja California, said Alejandro Gutiérrez, 33, the company’s chief operating officer. It was founded in Guadalajara in 1985 to serve Mexican patients, but the company began focusing on dental tourism when its first location in Los Algodones opened in 2001. 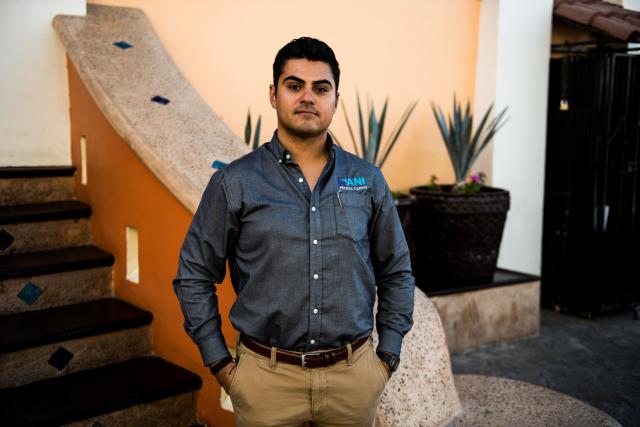 The business has grown, and Sani now has two clinics in Los Algodones employing 38 dentists. Sani’s primary location in town opened in 2008 and its second four years later. Last month, Sani opened a facility in the vacation town of Playa del Carmen, on Mexico’s Yucatán Peninsula.

Aging populations in the United States and Canada, the professionalization of dental practices in Los Algodones and the wider availability of internet resources for patients have helped the village and Sani Dental Group grow, Gutiérrez said. Former patients refer 70% of their new customers, he said.

The company also dominates the village. Sani Dental Group’s owners also run two hotels, the Cielito Lindo and the Hacienda Los Algodones, and the town’s “MediPlaza,” courtyard built adjacent to the company’s main dental facility in 2017. It’s surrounded by clinics offering other types of surgery, stem cell treatments and hyperbaric oxygen therapy. The plaza also has a pharmacy, a Mexican restaurant, an American-style sandwich shop and a café.

Sani treats 10,000 patients a year, 80% of them American and 20% Canadian, Gutiérrez said. About half of the Americans travel from Arizona, California and Nevada, he said. Those who do have dental insurance can file claims for partial reimbursement in their home countries. Americans with health savings or flexible spending accounts can also use those tax-free funds to pay for care and even a portion of their travel costs. Those expenses also may be tax-deductible for those who do not use such accounts.

Most Americans travel to Los Algodones for major restorative dental work, said dentist Javier Muñiz Pérez, Sani’s 35-year-old medical director. “Normally, they are asking more about the implants,” he said. “It’s very rare for the patients just to ask to do maybe a filling or a cleaning.”

Donnette, 75, and Dan Brower, 77, did just that, however. The couple flew 1,000 miles from Spokane, Washington, for cleanings and X-rays. This was the retirees’ fifth trip to Los Algodones for dental care, including a previous visit when both had substantial work done to restore their teeth. Their local dentist charges $332 for a checkup, Donnette said, compared with $90 at Sani.

“We like this place,” she said. “Even with insurance back in the States, it’s expensive.”

Dan said they canceled their $90-a-month dental insurance plan and instead opened a special savings account for dental treatments in Mexico. 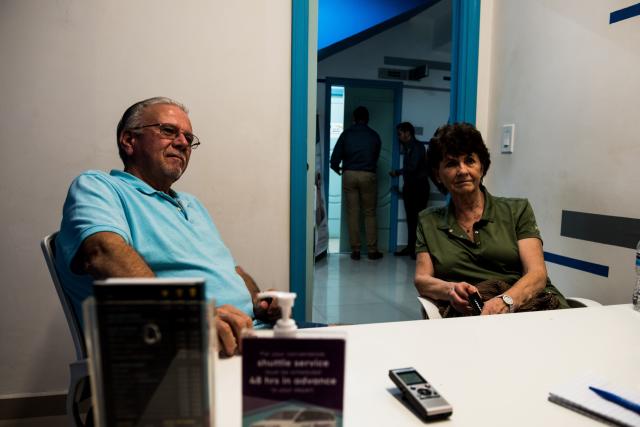 The Browers lived near Phoenix for years and learned about Los Algodones from family and friends. “Almost everybody in there drove down,” Donnette said. The couple also likes to visit a nearby casino in Arizona while they’re in Mexico for dental care, she said.

Sani Dental and other clinics are set up to ease the minds of foreign patients. All employees speak English. The company’s call center has a U.S. phone number. They offer patients free transportation to and from the airport and often provide discounts or complimentary accommodations at one of their hotels.

The clinics themselves have a very clean, modern look. TVs line the walls showing CNN, and there’s free Wi-Fi. Sani’s dentists have a wide variety of specialities, including a maxillofacial surgeon, one of just two in Los Algodones, Gutiérrez said. The main Sani location also has a full operating room for the most complex procedures.

On arrival, patients meet with non-clinical staff to provide records and other information and to arrange payment. Then they meet with a diagnostician who helps patients formulate their treatment plan and refers them to specialists at the clinic, who explain the procedures and follow-up care, Muñiz Pérez said.

At the Hacienda Los Algodones, recovering patients lounged in the hotel’s courtyard and small restaurant, some holding ice packs to their faces. The restaurant menu notes which foods are soft, like oatmeal and yogurt, and safe for patients to eat. The inn has a pool and a hot tub, and the grounds are secured by a large iron gate at night. Cars with license plates from several U.S. states, a Native American reservation and a Canadian province filled the parking lot, but many visitors leave their vehicles in California and cross the border on foot.

Stefan Rodman, 68, doesn’t care much for Los Algodones as a destination, but the Morro Bay, California, resident was enthusiastic about the dental care he got at Sani.

Every race or ethnic group has specific health concerns resulting from environmental and cultural factors, including lifestyle, genetics and more....

Haiti Doesn’t Have a Vodou Problem,It Has a Christianity Problem