Liberals have a tendency to wring their hands at the strong support President Donald Trump — he of the three wives and multiple affairs, and a tendency to engage in exceedingly un-Christian-like behavior at the slightest provocation — continues to receive from the white evangelical community.

But focusing on the disconnect between Trump’s personal actions and the moral aspects of their faith misses the issue that keeps their support firm: racism. Modern evangelicals’ support for this president cannot be separated from the history of evangelicals’ participation in and support for racist structures in America.

Evangelicals, in religious terminology, believe that Jesus Christ is the savior of humanity. They have a long history in America, and include a number of different groups, including Baptists, Pentecostals, Methodists and nondenominational churches. After the schism among the Baptists, Methodists and Presbyterians in the 1850s over slavery, conservative denominations like the Southern Baptists — who defended slavery through their readings of scripture — came into being. And because the primary schisms between northern and southern denominations was over the issues of slavery, in the pre- and post-Civil War years, African American Protestants formed their own denominations.

Evangelical denominations formed from these splits in the South were usually comprised of people who had made money from slavery or supported it. After the Civil War many were more likely to have supported the Ku Klux Klan and approved of (or participated in) lynching. The burning cross of the KKK, for instance, was a symbol of white Christian supremacy, designed both to put fear into the hearts of African Americans and to highlight the supposed Christian righteousness of the terrorist act. 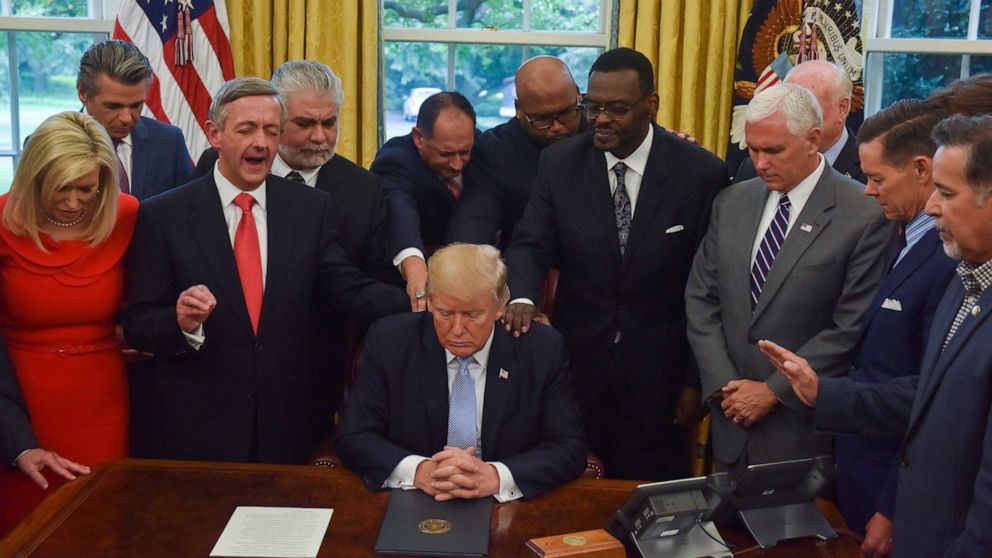 During the civil rights movement, many white evangelicals either outright opposed Martin Luther King Jr. or, like Billy Graham, believed that racial harmony would only come about when the nation turned to God. in the 1970s, evangelicalism became synonymous with being “born again” and also against abortion and, with the rise of the Moral Majority in the late 1970s, they began to seek not only moral, but political power.

Ronald Reagan, who also counted evangelicals among his most vociferous supporters, started his presidential campaign on the platform of states’ rights from Philadelphia, Mississippi, where Michael Schwerner, James Chaney and Andrew Goodman were murdered by several Klansmen with the participation of local law enforcement in 1964, while attempting to register African Americans to vote. Decades later, the Rev. Jerry Falwell, the evangelical leader, opposed sanctions on South Africa’s apartheid regime and insulted Bishop Desmond Tutu, a Nobel Prize Peace winner, as a “phony.”

After 9/11, many evangelicals vilified Islam and created cottage industries and ministries promoting Islamophobia. And when Barack Obama was elected president, they regrouped, bought guns and became Tea Partiers who promoted fiscal responsibility and indulged in birtherism, promoted by no less than the son of Billy Graham, Franklin.

Still, evangelicals have worked to make a good show of repenting for racism. From the racial reconciliation meetings of the 1990s to today, they have dutifully declared racism a sin, and Southern Baptists have apologized again for their role in American slavery — most recently in 2018 via a document outlining their role.

But statements are not enough. Proving how disconnected they are from their statements about atoning for the sin of racism, the 2019 Annual Convention of the Southern Baptists was opened with a gavel owned by John A. Broadus, a slaveholder, white supremacist and the founder of their seminary. In the meantime, the most visible Southern Baptist pastor, Robert Jeffress of First Baptist Dallas, recently said of Trump that “he does not judge people by the color of their skin, but whether or not they support him,” calling that “the definition of colorblind.” (Jeffress is such a supporter of Trump that he regularly extols him on Fox News, and even wrote a special song for Trump’s Campaign, “Make America Great Again.”)

So it’s not surprising that white evangelicals supported the Muslim ban, are the least likely to accept refugees into the country (according to the Pew Foundation) and, though a slim majority oppose it, are the denomination most likely to support Trump’s child separation policy. White evangelicals certainly are not concerned with white supremacy, because they are often white supremacists.

And Trump appeals to these evangelicals because of his focus on declension, decline and destruction, which fits into evangelical beliefs about the end times. When Trump used the term “American carnage” in his inaugural address, evangelicals listened; they too, believed America is in decline. Their imagined powerlessness, and the need for a strong authoritarian leader to protect them, is at the root of their racial and social animus.

Their persecution complex is a heady mix of their fear of “socialists,” Muslims, independent women, LGBT people and immigration. Their feelings of fragility, despite positions of power, make them vote for people like Donald Trump — and morally suspect candidates like Roy Moore. Rhetoric, not morality, drives their voting habits.

All of this has made a mockery of white evangelical protestations about morality and the family. Moral issues once drove white evangelical votes but, first when Obama was elected and then when the Supreme Court struck down the federal ban on same sex marriage in June of 2015, what remained was their fear.

Trump promised justices and a return to a time when they felt less fear, and he delivered, at least on the former. White evangelical fealty to him is firm. Evangelicals in America are not simply a religious group; they are a political group inexorably linked to the Republican Party.

Trump delivered evangelicals from the shame of losing, and they will back him again in 2020 to avoid losing again. So perhaps we should take evangelicals at their word that they will support Trump come hell or high water, rather than twisting ourselves into knots trying to figure out why.

HAVILA AND THE TUTSI HEBREWS