Dred Scott was a Black slave owned by a surgeon of the U.S army named; James Emmerson who lived in the slave state of Missouri. In 1834, James Emmerson moved from Missouri to Illinois which was a free state, then to Wisconsin territory, also a free territory. These moves by James Emmerson was in line with his duties as dictated by the military he worked for.

In the course of their travels, Dred Scott found himself a beloved named Harriet Robinson with whom he fell in love and subsequently married. She thus became a member of James Emmerson’s family.

James Emmerson also found himself a beloved wife and together with the Scotts, they moved back to the slave state of Missouri in 1840. In 1843 however, James Emmerson died.

Upon the death of his ‘master’, Dred Scott petitioned his ‘mistress’; the deceased James Emmerson’s wife for his ‘freedom’. In fact, Dred Scott actually sought to buy his ‘freedom’ from her but she refused to grant it.

In view of this, Dred Scott and his wife with the aid of anti-slavery lawyers petitioned the Missouri State Court in 1846 to attain their political freedom on the premise that; their residence in the free state of Illinois and the free Wisconsin territory have by law granted them freedom from slavery of any form.

Their petition was satisfactorily granted by the court in 1850 but overturned by the Missouri Supreme Court in 1852 by Chief Justice Roger Brooke Taney. 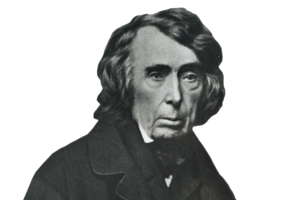 Roger Brooke Taney argued that; though an Afrikan-American is recognized as a citizen by one state, that recognition does not naturally translate into general citizenship of America and thus the Afrikan-American in question cannot be accorded those rights and privilege the average American citizen enjoys including petitioning a federal court for ‘freedom’ from slavery. Thus, the case should have been thrown out of the windows in the initial trials.

But this ruling by Chief Justice Roger Taney was one deeply rooted in the pits of racial discrimination and garnished with the superiority complex that troubled the average white populace of the time. Because the federal laws allowed for by inference a person recognized as a citizen of one state to be accorded the right and privilege provided for the average American citizen including the right to petition the federal court to be granted freedom from slavery.

Chief Justice Roger Taney was only acting outside of his legal acumen and inside of the narrow corridors of racism. What did he seek to gain from denying Dred Scott and his wife their political freedom? To what end did he overturn the 1850 State court ruling?

Of course, these questions would only take us down the road of those benefits derived from enslaving persons of Afrikan descent living in America. Granting political freedom through a state court ruling to an Afrikan-American couple within a slave state would challenge the authority of those base laws still holding the remaining Afrikan-American community in shackles within the state in question, irrespective of how logical and morally appealing the petitioners’ reason may be.

Chief Justice Roger Taney was most probably soothing his misdirected ego and defending the miserable segregation laws that retained in the average white community a sense of superiority. But either way, his ruling on the Dred Scott Case went down as one of the worst in the history of a U.S Supreme Court ruling, and it actually is.